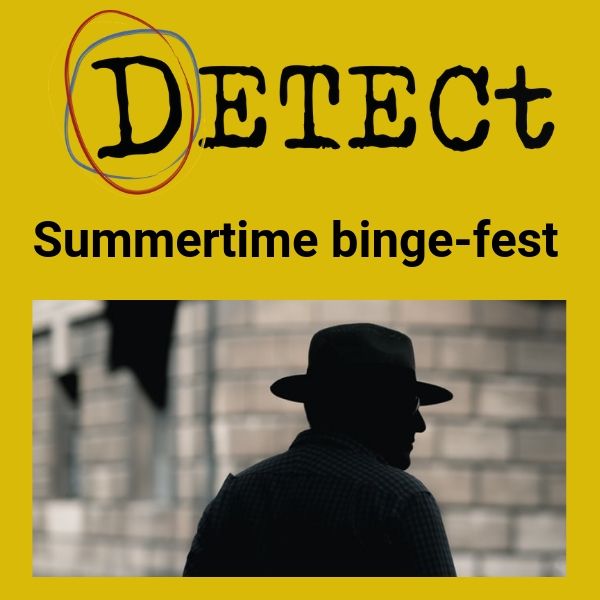 Might some of the books on your e-reader or shelf at home have something to say about European identity? Sales of crime fiction in the UK outstrips all other genres. Similarly, across the continent crime is a huge seller. Is this thrilling genre helping to forge or critiquing a sense of European identity? DETECt a pan-European research team is currently investigating the genre to ascertain what books, films, and TV series are saying about contemporary Europe.

In the international marketplace European crime fiction is more popular than ever before. Authors such as Andrea Camilleri, Fred Vargas, Yrsa Sigurðardóttir, and Valerio Varesi have won critical acclaim and achieved considerable sales. A whole raft of TV series including Spiral, The Killing, The Bridge, and Trapped have shown that Europe is able to compete on equal terms with anything produced in Hollywood.

What European crime books and DVD boxsets to pack for your holidays? The DETECt research team has put together some recommendations of novels to download onto your kindle and shows to order from Amazon or iTunes. Summertime is the season of crime with the DETECt Desert Island books and DVDs. 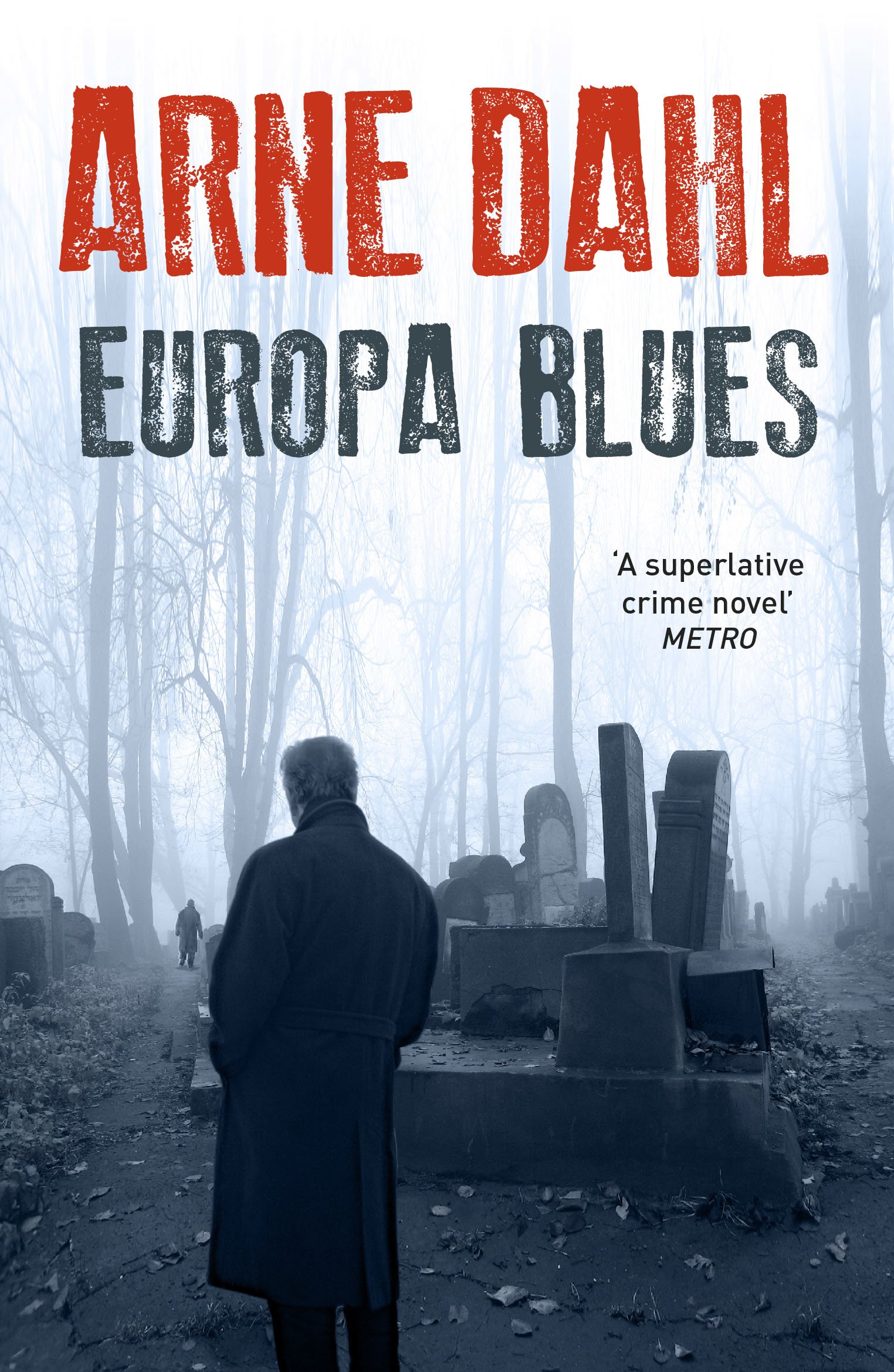 In 1998 literary critic Jan Arnald started writing crime fiction under the Arne Dahl pseudonym. The Arne Dahl books have sold more than 3 million copies and been translated into 32 languages The books have been the recipient of several high profile prizes including both Danish and German Crime Writing Awards.

Arne Dahl’s Europa Blues (2001) is not only an extremely thrilling and strictly plotted crime novel. It’s also a novel about contemporary consequences of a bloody European past – a guilty continental conscience.

With Miles Davis’ iconic album Kind of Blue as a literary soundtrack, the historical blues of Europe resounds and echoes in a violent case that shows cracks in the contemporary Swedish and European societies. Entertaining, yet eye-opening.

(Selected by University of Debrecen)

Do you remember the summer of 2015 when Budapest’s Keleti Train Station became a refugee camp?

In Adam LeBor’s District VIII, detective Balthazar Kovacs investigates the case of a missing body during those days of political, economic and social crisis.

The novel is a part of the Danube Blues series and offers an excellent introduction to the problems of contemporary Hungary corrupted by political games and social fears. A thrilling and informative literary trip to nowadays Budapest. 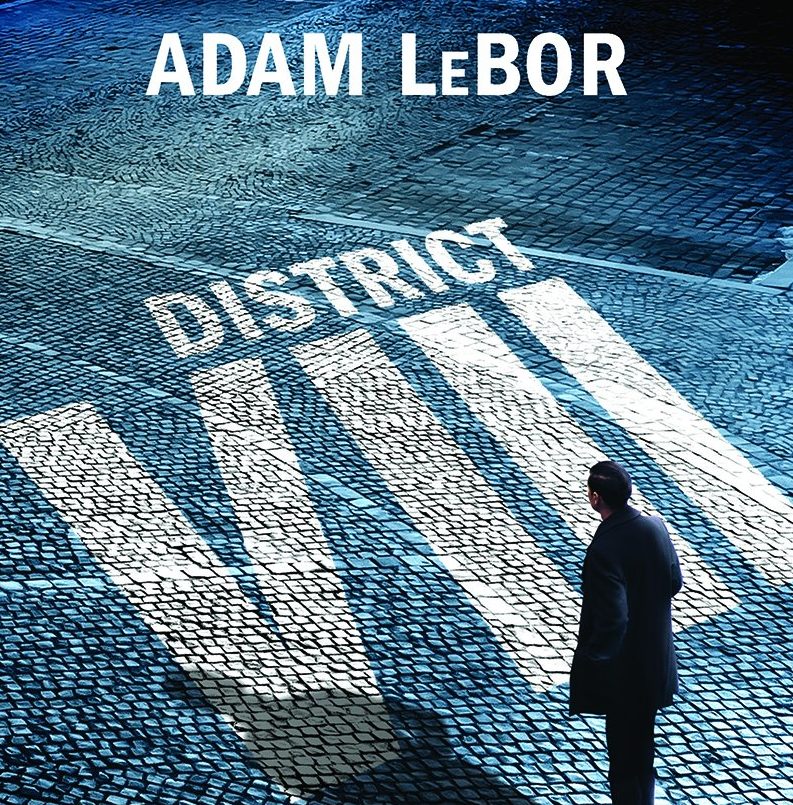 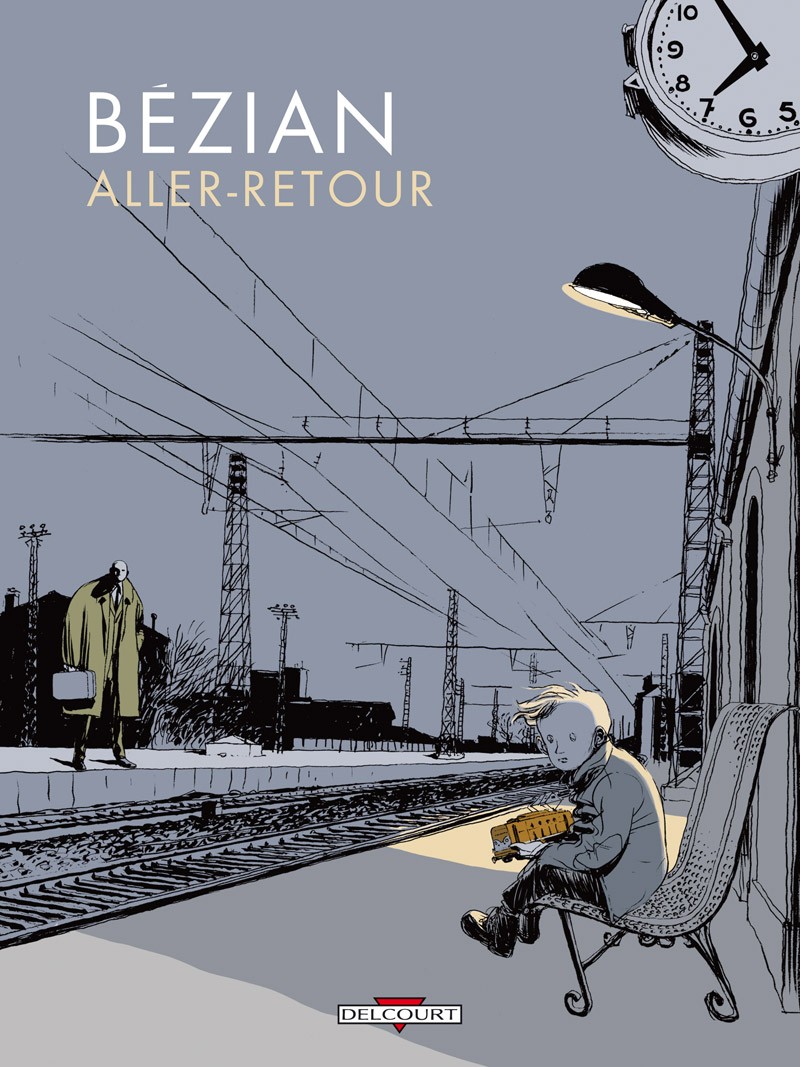 For those who don’t want to make a choice between novels, movies, and comics, while at the same time trying to find the hidden jewel in the overwhelming production of crime fiction today where winners should never be allowed to take it all, this is want you have to read and watch this Summer: Aller-retour (Round Trip), a 2012 graphic novel by Frédéric Bézian, a book that includes, among many other things, an amazing reworking of Jean Delannoy’s film Maigret and the St-Fiacre Affair (1959), itself already an adaptation of the eponymous novel by Georges Simenon (1932).

It is the story of a man returning to the place of his youth, both utterly banal and haunted by ghosts. It is also a great example of crime fiction, although one may wonder if it is not also something else? For where is the murder? Is there a victim? Why should one investigate anyway?

Aller-retour definitely blurs the boundaries between styles and genres. But it is in the first place a masterpiece.

“Once upon a time in Sicily, a true story”.

This is the incredible and untold story of the “hunting season” during the war between the mafia and the state of the 1990s.

Saverio Barone is a young and ambitious provincial prosecutor who has the guts to stand up for what is right. When he dares to report his own boss, most of his colleagues disapprove, although the chief of Palermo’s Antimafia Pool takes notice and appoints him to his unit. A true story narrated with an unconventional, powerful visual style.

The series, based on the Italian prosecutor Alfonso Labella’s autobiographical book “Cacciatore di mafiosi”, is produced by Rai Fiction, Cross Productions and Beta Film. Francesco Montanari, the lead actor in the series, was awarded as “Best Performer” during  Canneseries 2018. Season 2 will premiere in November 2019. 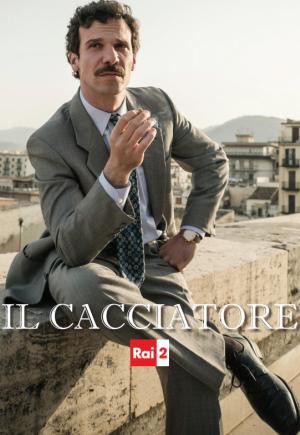 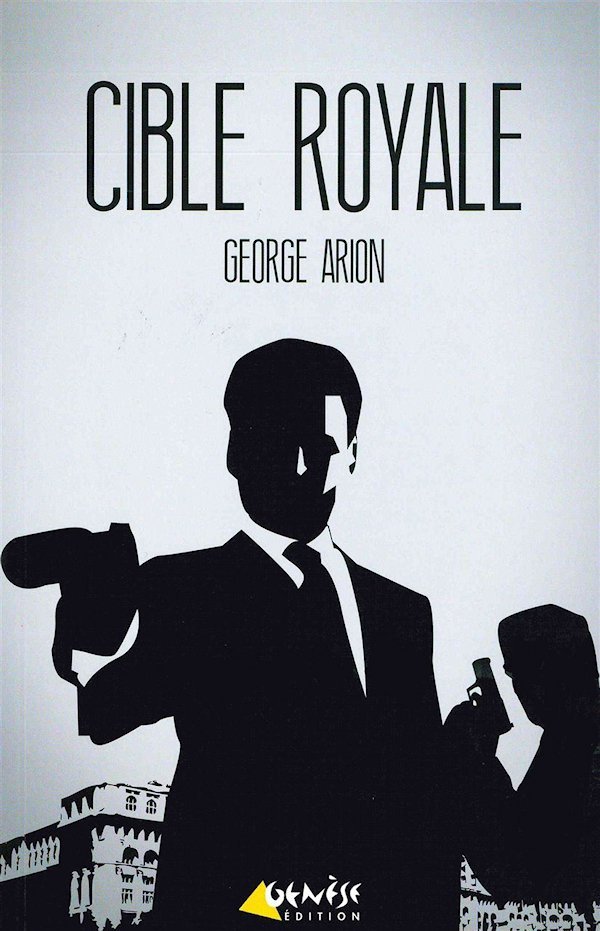 (Selected by University of Bucharest)

Cible Royale (Royal Target, Romanian orig. Nesfârșita zi de ieri, The Endless Tomorrow) is both a piece of investigative fiction and a political thriller due to George Arion, Romania’s czar of the crime genre.

Set in the 1990s, in a troubled epoch in which the Eastern European enthusiasm of deliverance from totalitarian regimes mingled with growing anxieties about the future, and especially about the possibility of a relapse into the “wrong” sphere of political influence, the novel spins a fictional multileveled plot around the real event of the first visit, after the fall of the Ceaușescu regime, of Mihai I, the ex-king of Romania.

Arion convincingly reconstructs this dramatic event, which actually pitted a political elite still connected in many ways to the former police state and interested in perpetuating the anti-monarchic Communist mythology, and a significant part of the civil society that regarded the visit of the former monarch as a symbolic return to local parliamentary traditions and rule of law interrupted in 1944 by the Soviet occupation.

This authentic historical drama becomes the background of a state of the art political thriller, following with a vibrant pace the risky inquiries into the planned assassination of the king of a journalist whose audacious and uncompromising spirit is charmingly hidden under appearances of cynicism and sarcasm.

Cible Royale, is a narrative both intense and hilarious that introduces the Western European reader, in the most attractive of manners, to the historical and contemporary intricacies of Romanian and Eastern European politics and psyche.

The novel, first published in Romanian, with considerable success, in 2002, was translated into French by Sylvaine Audet-Gainar and published by Genèse Èditions, Paris-Brussels, in 2014.

(Selected by University of Ioannina)

Since the night Inspector Haritos had the brilliant idea to offer his chest as a shield in order to save Elena Kousta from a bullet fired by her stepson, his life has changed radically. Haritos’ long convalescence has given his wife the opportunity to take control and, now, subdued and tamed, he witnesses a shocking suicide captured live on TV.

The victim, Iason Favieros, a former revolutionary activist who had been jailed during the dictatorship of the Colonels, had built up a sprawling business empire in a surprisingly short period of time, including Olympic contracts. This tragedy is quickly followed by the suicides of a well-known Greek MP and a national journalist – at his own party.

With the police and the press left groping in the dark, Inspector Haritos is under pressure to solve the mystery that is lurking behind this series of public suicides, unveiling the secrets buried in the victims’ past. 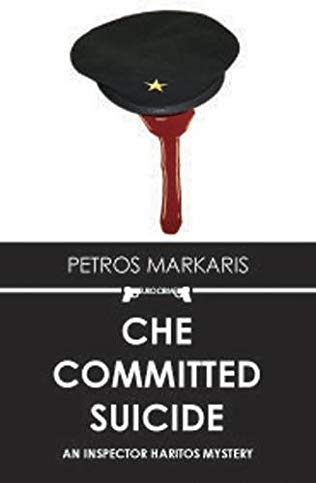 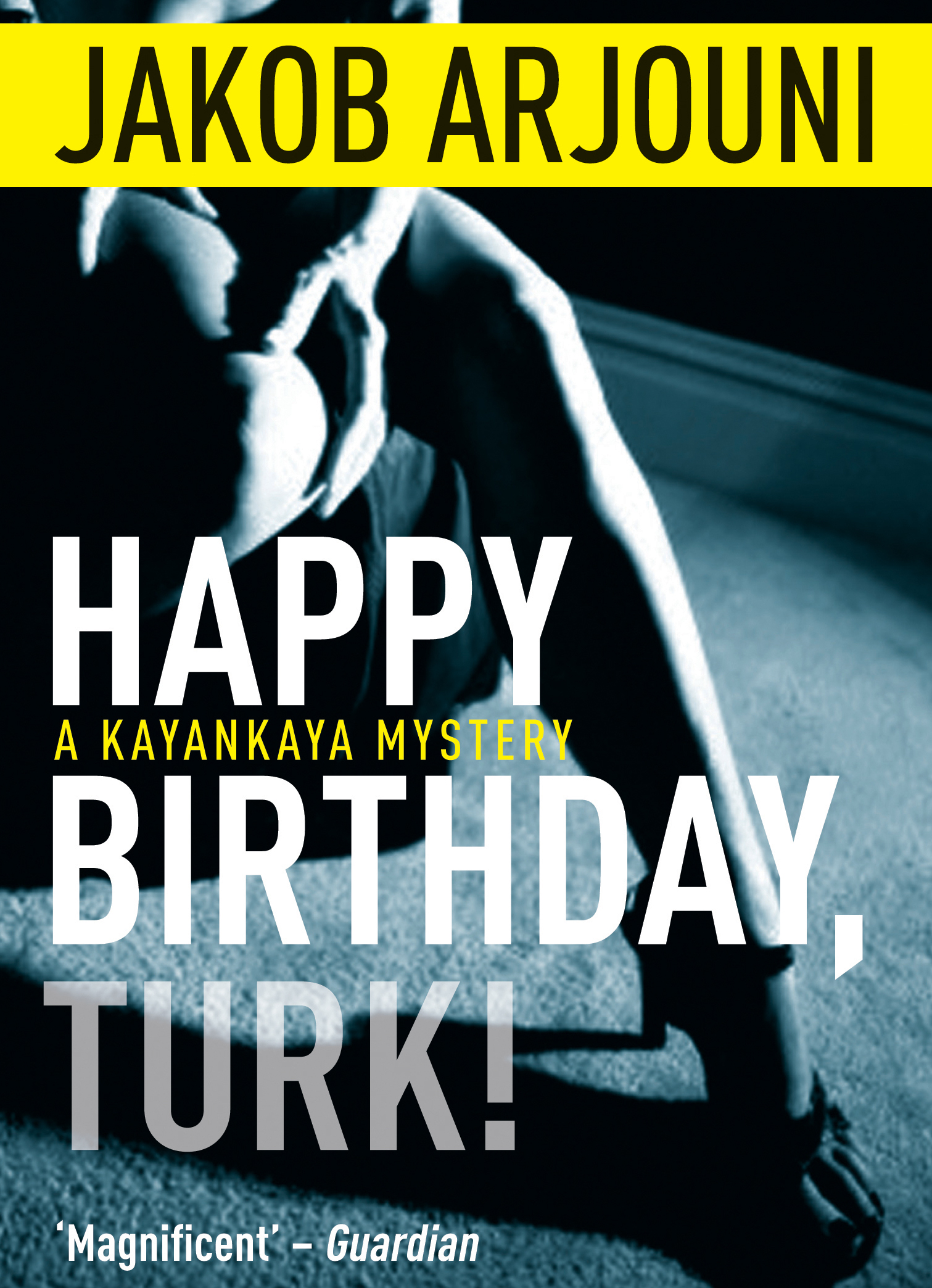 A self-confessed fan of Raymond Chandler, Arjouni created a hero cut from the same cloth as Phillip Marlowe who was relevant to a Germany finally shaking off the shackles of post-war physical and existential trauma whilst simultaneously undergoing a transformation into a modern industrious powerhouse.

With Kemal Kayankaya, Arjouni constructed a flawed champion who stood slightly removed from the society he was protecting and was viewed askance by locals suspicious of the migrant population helping to forge the new Germany.

In this première outing for Kayankaya, the body of Turkish worker Ahmed Hamul is found in the center of Frankfurt’s red-light district. Mixing tropes from the American hard-boiled tradition with sociological analysis of how Germany treated the migrant community in the mid-1980s Happy Birthday Turk! introduced an important voice into the canon of European crime fiction who would continue to use the genre as a means to explore social and political changes in subsequent books.

Silence of the Sea by Yrsa Sigurðardóttir

Winner of the Petrona Award. The sixth novel in Yrsa’s Thóra Gudmundsdóttir series evokes Agatha Christie’s And Then There Were None.

A spine-tingling locked room mystery filled with an ever-present sense of impending doom. 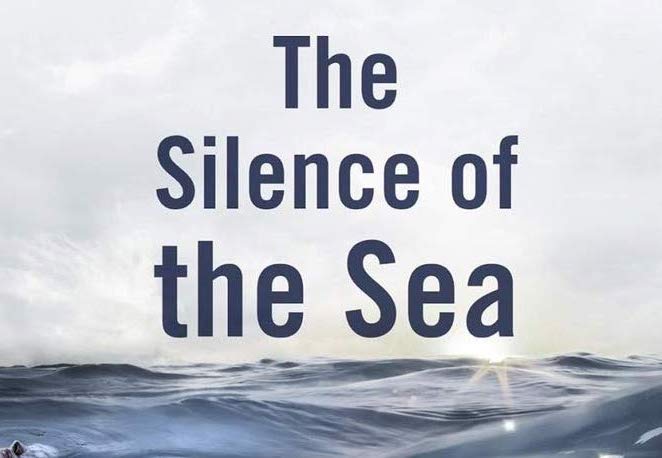 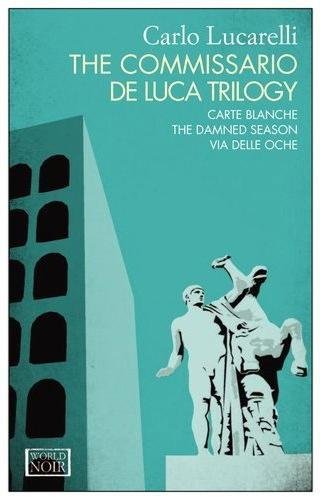 (Selected by University of Bologna)

Inspector De Luca’s first appearance coincided with Carlo Lucarelli’s own debut in 1990. The investigations of De Luca, a former member of the Fascist political police, are set in the late days of World War II and its immediate aftermath.

The trilogy, exploring one the of most traumatic periods in Italian history through the lens of hard-boiled fiction, has been translated into various languages including English, French and German.

A series of TV film adaptations were produced by the Italian public television in 2008. More than 20 years after the publication of these three original novels, two new instalments in the saga have appeared in Italian since 2017.

Iceland’s first television crime series produced with an eye on the international market (and the most expensive one as well), Trapped adapts the well known formula of Nordic Noir and takes it in to new directions.

When the arrival of a large ferry from Denmark in the harbor of a small and remote town (the series has been filmed in Siglufjörður, a small fishing town on the northern coast of Iceland) coincides with the discovery of a mutilated corpse, the local police force has to leave its daily routine of dealing with traffic violations behind and rise to the challenge. A blizzard and severe weather conditions prohibit enforcements from the capitol to come to their aid and trap the whole town and the passengers of the ferry with the unknown killer. Not without some clichés (e.g. the emotional baggage of the divorced protagonist, the chief of the local police; corrupt local politicians; heinous and greedy businessmen), the series nonetheless captivates its audience as the body count rises and tensions among the locals escalate.

Apart from the crime story itself, the claustrophobic atmosphere and the palpable iciness of the harsh and misanthropic environment contribute significantly to the series’ fascination. Trapped creates an atmosphere as Nordic as it can get and uncovers, in its course, a true abyss in the middle of this sleepy town, unveiling a truth to its viewers that is aptly summarized in the series’ tagline: Nowhere is safe.

The first season has been sold to numerous countries and a second season, which takes the main character first to Rejkjavik and then again to another small town, aired in Iceland in late 2018. A third season is in the works. Both the first and second season are available on DVD or Blu-Ray, and on Amazon Prime. 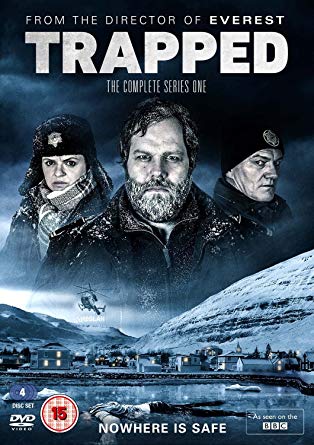