Serial Narratives and the Unfinished Business of European Identity #3

Serial Narratives and the Unfinished Business of European Identity #3 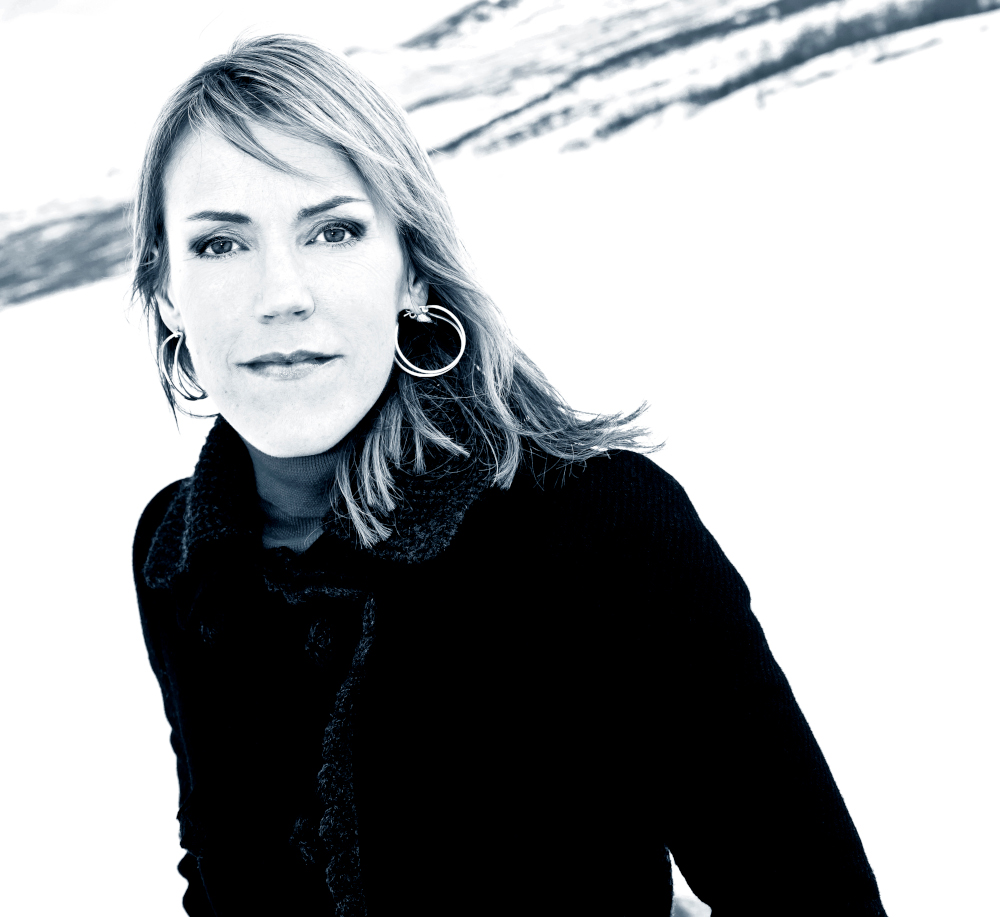 Identity in the North of Nordic Noir.

Nordic Noir has certainly been marketed, and possibly read, as a genre (however diverse it actually is) which describes and uses – to non-Nordic readers – exotic geographical places. Louise Nilsson remarks that in Nordic Noir, “natural environments […] matter, […]. Ice, snow, and forests are common ingredients, often determining specifics of the plot and affecting the minds of the characters, even the dead bodies (2016).” Kerstin Bergman has furthermore argued that the characters in Åsa Larsson’s novels almost live in symbiosis with the region. (2014, 80-89).” This region often represents home in more than a geographical meaning, it evokes feelings of awe and pure happiness in a close to spiritual manner, and it is clear it evidently helps form the identity of characters. Åsa Larsson’s novels about tax attorney Rebecka Martinsson are situated in the far north of Sweden, in and around the mining town Kiruna. In the first novel, The Savage Altar (2003, 2004), Rebecka Martinsson leaves the urban, hectic life in Stockholm, to return to the far north of her childhood and teen years and eventually decides to permanently settle there again. By reading Larsson’s five novels it can be demonstrated how issues of identity are connected to the peripheral North – the “real” North of Nordic Noir. 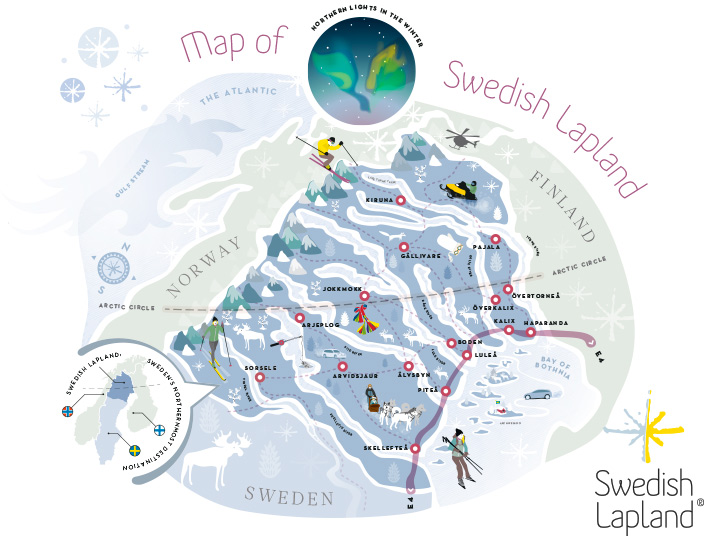 Views of the north

In most of Larsson’s novels a map of the region is included. The closeness to the Norwegian and Finnish borders, and also the Russian border, is obvious. Steven Peacock writes that north of Kiruna, “there is only roadless, uninhabited land. To the East, boreal forests stretch for hundreds of miles into Finland and Russia” (2014, 125). To Rebecka and those who live there, the place is beautiful and peaceful (despite the many violent crimes committed). To the outsider, it represents “Nowheresville” (2011, 209).

Contrary to popular opinion, the darkness and cold of the long winters can be positive to a person, life becomes simpler with less to take in, and fewer colors and smells.  The shorter days means that a person can rest her head (2006, 301). Tourists travel to Kiruna, the mountains, and to Jukkasjärvi where the internationally famous Icehotel is built up every winter, so they might not visit the area necessarily to rest their heads, but enjoy the, to them, exotic outdoors environment. The tourists are mentioned already in the first novel of the series: “The plane to Kiruna was almost full. Hordes of foreign tourists off to drive a dog team and spend the night on reindeer skins in the ice hotel at Jukkasjärvi jostled for space with rumpled businessmen returning home clutching their free fruit and newspapers.” (2006, 55). When Rebecka is going back home, they are visiting a new and unknown place. Later in the series of novels when she has decided to stay, she thinks “I don’t want to be a guest and a stranger. Never again” (2011, 23). Compared to other novels where tourism is discussed, the tourists are never seen as intruders or exploiters, it is as if the nature is so strong nothing can disturb it. 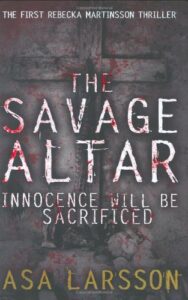 In The Savage Altar, the narrative is accompanied by the Aurora Borealis, “she” moves over the pages and the heads of the characters, and “[s]tars and planets are compelled to give way to her, this great miracle of shimmering light” (2006, 1). The Aurora Borealis, and, for example, ice, trees and rivers, are often given human qualities, thus blurring the border between human and nature. The border between human and animal is likewise blurred. As Kerstin Bergman writes, the place in Martinsson’s novels is one where “people and animals co-exist, dependent on each other for food, shelter and protection. Animals – dogs in particular – also play important parts in Larsson’s crime stories.” (2014, 109). In The Second Deadly Sin, Rebecka is forced to kill a dog in order to save a child – a child who, deeply traumatized, had pretended to be a dog in order to cope, walking on all fours and only communicating through barking. The killing affects Rebecka almost as deeply as when she had killed three men in self-defense. To kill a dog is to kill a close friend and equal. In addition, and importantly, The Blood Spilt alternates between chapters about Rebecka and the others, and a wild version of a dog, a wolf named Yellow Legs. Yellow Legs wanders across the northern regions of Russia, Finland, and Sweden exemplifying how the north is connected, that borders do not matter to her, she is free to move. The landscape makes past concerns and future worries disappear, and “[e]verything is now” (2006, 407). 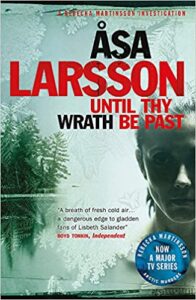 One of the characters remembers how her boyfriend used to touch her. “He liked to explore me. Count all my birthmarks. Or tap his fingernail on my teeth as I smiled, ticking off all the peaks of the Kebnekaise massif: ‘South Peak, North Peak, Dragon’s Back, Kebnepakte, Saksasapakte, Kaskasatjåkko, Tuolpagorni.’” (Until thy Wrath be Past 2). Here the connection between the nature of the place and identity is illustrated through a story about two young lovers. This connection is very intimate, the nature is as familiar as the body of the girlfriend.

When Rebecka has left Stockholm, and returned to Lappland, she mentions numerous times that she is “home” and “at peace.”  On several occasions, she physically shows her feeling of home and peacefulness; she presses snow to her face, she lies down in the snow, she lies down on the ground, looking up at the fir trees and stars. Larsson writes:

Without warning Martinsson is overcome by a feeling of pure, white happiness. It flows through her body and into her hands. She stands absolutely still. Dares not move for fear of frightening the moment away. She is at one with it all. With the snow, with the sky. With the river as it flows along, hidden beneath the ice. […]. With everything. Everyone. I belong here, she thinks. Perhaps I do belong, irrespective of what I want or feel (2011, 30).

Here too, the body and self are one with the place and nature. Moreover, Rebecka lives in her grandmother’s house, and she likes to keep it exactly as her grandmother used to keep it. She sleeps well there, compared to Stockholm, and she realizes that she never “made a real choice” until she returned to Lappland. (2008, 69). Living in her childhood home again surrounded by the snow, sky and river transforms her and as she says above, even gives her agency.

History: borders of periphery, center and self 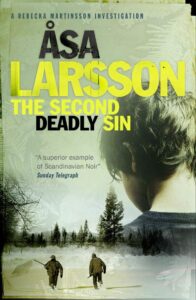 Two of the novels – Until thy Wrath be Past and The Second Deadly Sin – are partly set in a historical past. The titles of the novels have religious connotations, to signal the graveness of the crimes committed and of war. They deal with Sweden during the two world wars.

The Second Deadly Sin tells the history/story of the “birth of Kiruna.” With the expanding mining industry, Kiruna represented the future, and in 1914 it was the newest town in Sweden. The young woman Elina is on her way by train to Kiruna to work as a schoolteacher. She looks forward to starting a new life and feels liberated: “She has just celebrated her twenty-first birthday, and she is on her way to Kiruna. The world’s newest town. That is where she belongs. In this new age.” (2014, 53) During the train ride the Swedish landscape amazes her, and she feels as a pioneer. She sees the bigness of Sweden, but also sees Kiruna as a global place, not peripheral: It is the “world’s newest town” and to her it a town of modernity. On the train, Elina meets and falls in love with Hjalmar Lundbohm (a real historical person), who is managing director of L.K.A.B, the big mining company. Lundbohm has grandiose ideas for the town, which he calls “his”, and envisions a town that is permanent: “with schools and bathhouses and adult education – as in Pullman City in the U.S.A. and Henry Ford’s Fordlandia in South America. Those are models to live up to” (2014, 76). He too sees Kiruna as global, and more than a capitalist venture; this is a place where people will come to stay. The war that just has erupted in Europe will benefit Kiruna and their production of iron ore. The train ride through Sweden thus represents moving to the future for both Elina and Hjalmar, and Kiruna is a glittering promise of transformation, erasing borders between old and new, and periphery and center, and it will deeply affect them and their identity.

The train ride as a metaphor is problematized in Until thy Wrath be Past. Sweden refused to take a stand – to stay ‘neutral’ – during World War II, although the neighboring countries Denmark and Norway had been occupied by Nazi Germany. Yet between 1940 and 1943 the Nazis were allowed passage through Sweden to reach their northern occupied territories. The train ride still symbolizes erasing of borders, and connecting center and arctic periphery, but by allowing German troops to travel through Sweden to reach their troops with supplies this erasure also means allowing neighbors to suffer, something that is still discussed today.

There are few series of novels that deal with the far north in depth, and Larsson’s series is an excellent opportunity for readers to learn more about the place and follow a character’s identity formation in this geographical periphery. Despite that the concept of borders is highlighted, the borders seem important because they can constantly be crossed and blurred. This is emphasized by the descriptions of the animals, nature and climate. Furthermore, European history is very present, to a large extent due to the expanding mining industry in Kiruna, which transforms the place and its people from the local and peripheral to global and central. 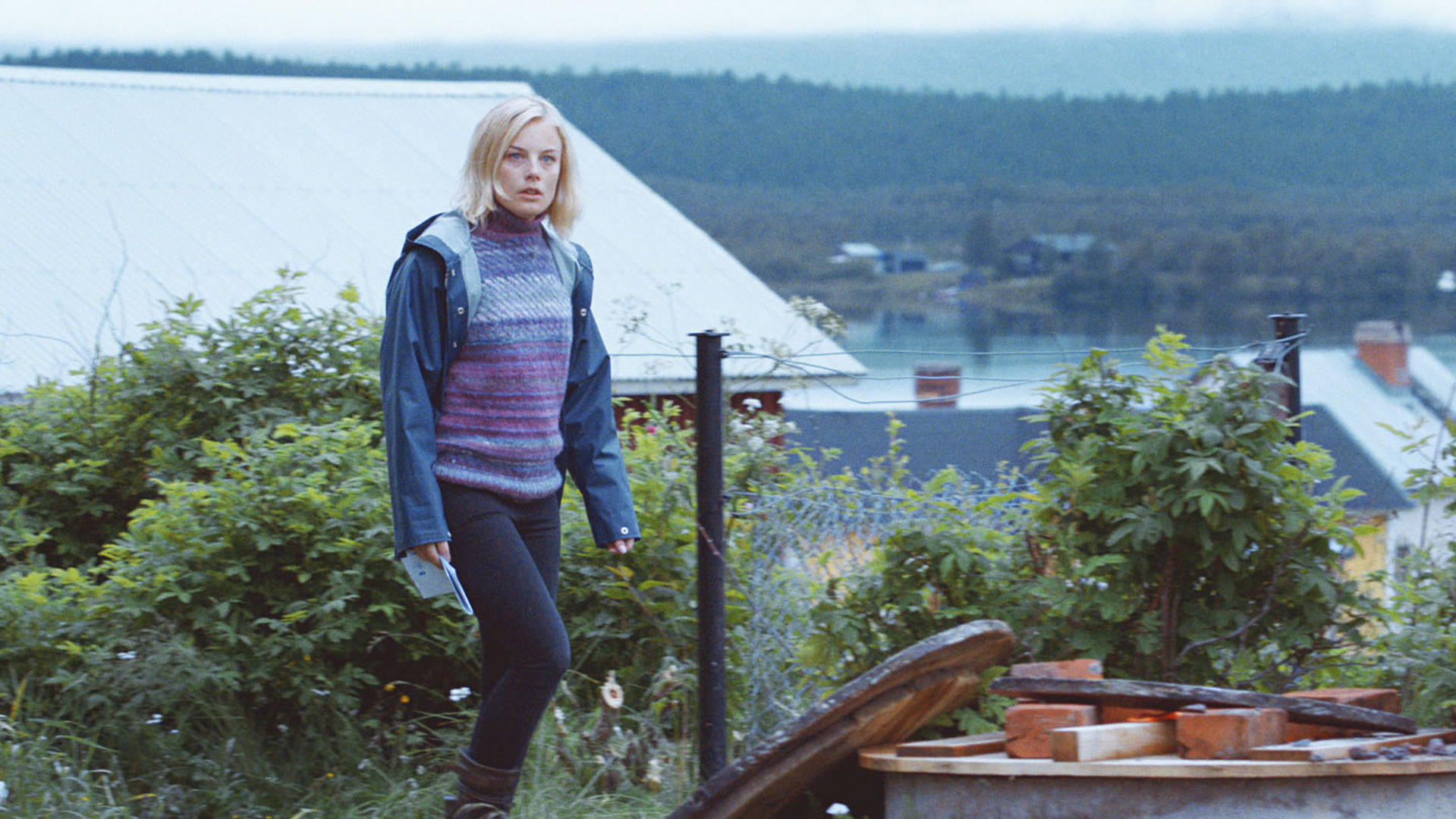 Larsson, Åsa. Until thy Wrath be Past. London: Quercus publishing Plc, 2011.

A Discussion of Åsa Larsson‘s Series about Rebecka Martinsson

By reading Larsson’s five novels it can be demonstrated how issues of identity are connected to the peripheral North – the “real” North of Nordic Noir.