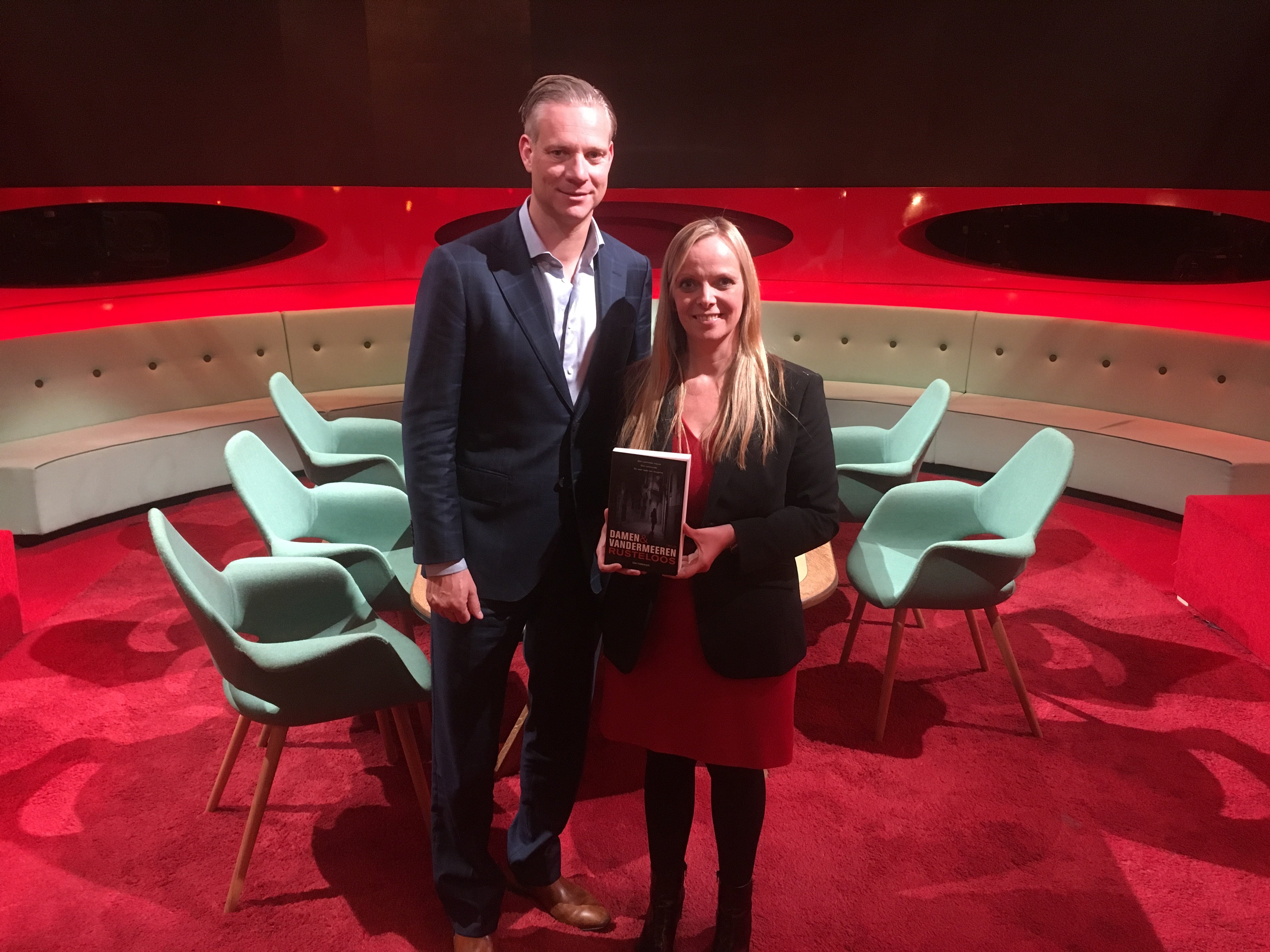 Flemish crime fiction is, as an institutionalized genre, a rather recent phenomenon. It is generally claimed that the Flemish version of the genre was popularized by the work of Jef Geeraerts (1930-2015), who after a successful career as autobiographical fiction writer (nowadays highly contested because of the racist and sexist overtones of his books), shifted to crime fiction, probably for purely commercial reasons. The fact that Flemish crime fiction did not really exist as a separate literary category, in spite of the importance of crime fiction in francophone Belgium as well as the long tradition of crime fiction in The Netherlands, is a further proof of the limits of literary contacts between neighbors sharing the same nationality (Dutch-speaking and French-speaking Belgians) or the same language (Flemish and Dutch display smaller differences, but are clearly the same language).

One may have the impression that the Flemish crime fiction scene is an all-male world. Most authors in the field are men. The subgenres that are most represented are “typically male” subgenres, with a certain emphasis on technology, intelligence, complot theories, and, of course, violence, at thematic as well as verbal level. And although there is some room for women in the cast, most leading characters are men.

This impression is deceptive however, because it does not match the fact that quite some authors are female, while we also know that more than eighty percent of the readers are women, who certainly do not dismiss the work of female writers. The main reason of this misperception is both historical and institutional. Critical discourses on Flemish crime fiction time and again repeat that “everything” started with Jef Geeraerts, whose very macho novels continue to represent the standard of what is –or ought to be– written today. Therefore, the same critical voices no less repeatedly claim that interesting female crime fiction authors are only available in translation (authors such as Camilla Läckberg or Karin Slaughter are very positively reviewed in Flanders). This common opinion, imposed by an all-male group of critics, is maintained, and reinforced by the systematic underrepresentation and underrating of female authors in the prize system, where female crime fiction tends to be either ignored or dismissed without any change over the years in this regard.

A well-known, much translated and multiple prize-winning author of children’s literature, Hilde Vandermeeren (°1970) is the author of six standalone works of crime fiction, which she likes to define as “psychological crime novels”, and of a trilogy written in collaboration with the Flemish criminal lawyer Walter Damen. Her crime fiction has been very well received by the public and critically acclaimed in Flanders and abroad (yet more abroad than in her home country). Winner of the Hercule Poirot prize (awarded in 2013 by the readers jury and in 2017 by the professional jury), she has also obtained nominations for various Dutch prizes. 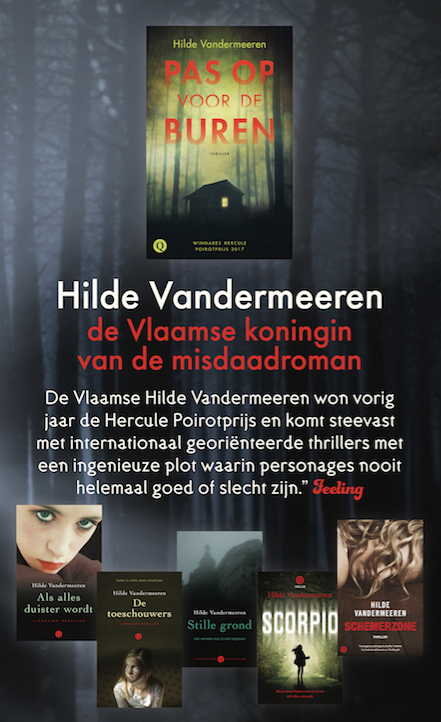 The position of these works in the larger field of Flemish fiction is very singular. First of all, Hilde Vandermeeren explicitly rejects the strongly male-biased tone and style of the godfather of the genre in Flanders, namely Jef Geeraerts. Her major sources of inspiration are Agatha Christie (perhaps less for the whodunit aspect than for the general setting and atmosphere), Roald Dahl (who equally succeeded in addressing younger and less young audiences) as well as British quality television (for the subtleness of plot construction and character description). Vandermeeren’s work is free from the macho tone and style of much contemporary crime fiction and it prioritizes psychological depth and character interaction. Key in this regard is the author’s background as a trained psychologist. What mainly interests her is the motivation of her characters and the question why people do (or not) what they do (or omit to do) and the role that is played by the specific circumstances of a certain decision. In a similar vein, Vandermeeren explicitly uses scientific knowledge on the way our brain functions, that is the way in which the brain can mislead or deceive us.

Second, she also abandons the somewhat mechanical choice of local settings, mainly explored by other Flemish crime writers such as Pieter Aspe or Jo Claes. Contrary to what is sometimes suggested, the preference given to non-Flemish location (London or Lisbon for instance) is determined by a personal quest for authenticity (Hilde Vandermeeren only writes on what she personally feels attracted to) and not by the belief that this will foster the international media career of the book, for it is exactly the opposite that happens (publishers and readers abroad are eager to find “couleur locale” and the international adaptation of this kind of works often tends to “retranslate” the non-Flemish setting and characters into “typically” Flemish characters and settings).

Vandermeeren’s most recent work is a trilogy written in collaboration with a famous Flemish lawyer, Walter Damen. The work, initially programmed as a series, was commissioned by the publisher, who was eager to develop a fictional transposition of some of the stories behind Damen’s legal cases. Vandermeeren enthusiastically accepted this proposal, but asked for a substantial redefinition: not a series (of at least ten volumes) but a trilogy (for in a trilogy there is room for character development, whereas a series always bears the risk of a flattened, static treatment of the protagonist), not a court novel but a story based on the personal life and adventures of a female lawyer with much room for the psychological evolution of this character, not only a description of the ruthless atmosphere and competition in the legal world but a more multilayered story with references to childhood traumas, not a fictional translation of local situation but a new story situated outside Belgium. 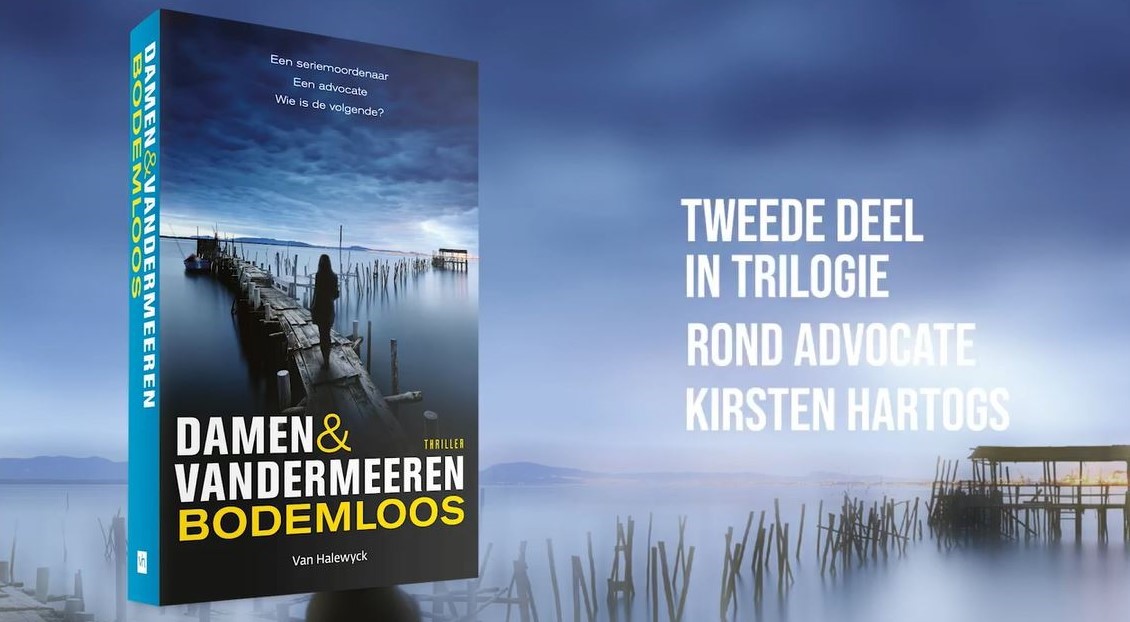 Female crime fiction is much more than just crime fiction written by women. It is virtually a challenge of what is generally accepted as characteristic of the genre (action-based narrative, hard-boiled characters and situations, graphic language, for example) and an attempt to open it to other perspectives and dimensions. Given the general tendency towards the blurring of boundaries between styles and genres, it is reasonable to anticipate a strong development of this type of crime fiction in the near future, certainly if one takes into account the fact that the actual readership of literary texts is increasingly female.

The development of female crime fiction is not necessarily hindered by the fact that one has to work in a smaller language, with severe market limitations. As shown by the example of Hilde Vandermeeren and Flemish crime fiction in general, which may be very successful abroad and benefit from all kinds of media adaptations, the major problem is less linguistic than cultural: the persistent role of male biases in the perception and reception of the genre or the underrepresentation of women in the review and prize system are not always “remediated” by the positive reception of her work outside Flanders. The current situation of her work is therefore also a good illustration of the difficulties of exceeding the initial limitations of a given cultural context. We may have the impression that European crime fiction freely moves within Europe. In practice, this is not the case and the many exceptions should not make us blind for these limitations.

“Eyeworks. Who We Are.” Wikipedia.