Discover Bologna in the footsteps of detective and noir stories.

In the city of Coliandro, there is a new tool at the service of cultural tourism: to travel between the places of noir narratives and those of real crimes that have marked Bologna’s history. The initiative is part of the European research project DETECt, coordinated by the University of Bologna.

Discover Bologna in the footsteps of detective and noir stories, crossing the places narrated in detective series set under the Two Towers, from the TV raids of Inspector Coliandro to the intrigues that animate the novels of authors such as Loriano Macchiavelli, Grazia Verasani, Carlo Lucarelli and Giampiero Rigosi.

To do so, from today, there is DETECt Bologna, a new webapp created as part of DETECt (Detecting Transcultural Identity in European Popular Crime Narratives), a European research project coordinated by the University of Bologna that studies the effects of the transnational and transmedia circulation of the crime genre in Europe.

“DETECt Bologna exploits a principle of semantic enrichment of urban space that allows the user to have a dual experience of the city: as a physical place, with its monuments, squares and historical buildings, and as a setting for cultural narratives and memories,” explains Monica Dall’Asta, professor at the University of Bologna’s Department of Arts and project coordinator. “Using GPS technology, the user’s position is transferred onto an interactive map divided into a series of stages: once the user has reached the marked places, the associated contents are unlocked and made accessible”.

Accessible via the DETECt project website, the app was developed by researchers from the Department of Arts and the Department of Classical Philology and Italian affiliated with the project – Sara Casoli, Silvia Baroni and Federico Pagello – under the supervision of Professor Ilaria Bartolini of the Department of Informatics – Science and Engineering (technological coordinator of the project). Various local organisations also collaborated, making their materials available: Emilia-Romagna Film Commission, Giallo Festival, Homemovies, Biblioteca Comunale dell’Archiginnasio, Associazione Culturale Luigi Bernardi.

You can then travel through the places of detective stories in Bologna accompanied virtually by some of the most important authors of the genre, including Loriano Macchiavelli, Carlo Lucarelli, Giampiero Rigosi and Grazia Verasani. And several video clips are dedicated to delving into the birth of one of the TV audience’s best-loved detectives: Coliandro, a true case of collective creation. Born from Lucarelli’s pen in a short story in 1991, the character of the Bolognese inspector has in fact been remodelled through various subsequent adaptations, up to the now famous television series directed by the Manetti brothers (and scripted, among others, by Rigosi), the eighth season of which was recently broadcast on Rai 2. 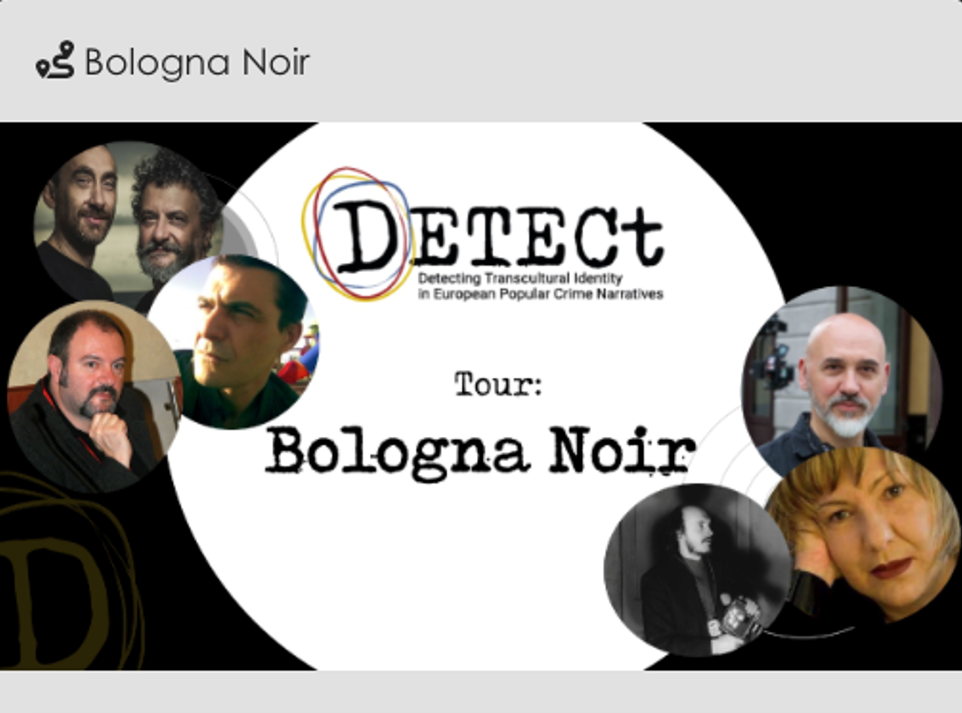 There are two itineraries proposed by DETECt Bologna. “Bologna noir”, which allows to discover how different places in the city have been reinvented and transfigured through a long series of literary, film and television narratives. It also rediscovers unusual works, such as the amateur films shot in Super8 film by director Mauro Mingardi.

The “Delitti sotto i portici” (Crimes under the porticoes) itinerary focuses on the dark side of real Bologna, retracing the crimes that have profoundly marked its historical and cultural memory. To guide the user through these painful pages of local history, evoked also by recovering period photos and newspaper articles, are the figures of Sergeant Sarti Antonio (created by Macchiavelli) and Commissioner De Luca (born from Lucarelli’s pen): the former grappling with the tensions of the years of lead (anni di piombo), the latter with the ambiguities and violence of Fascist Bologna.

The trait d’union between the two itineraries is the extraordinary cultural legacy of Luigi Bernardi: tireless publisher, as well as the author of some highly original noir novels, he played a leading role in supporting and stimulating the work of the first generation of Bologna mystery writers, starting with the publication in 1991 of the anthology “I delitti del Gruppo 13”. Bernardi’s editorial work is also responsible for the first transmedia adaptation of Coliandro: the comic strip version by Onofrio Catacchio of the story “Nikita” by Carlo Lucarelli, the first in which the Bolognese inspector appears. It is no coincidence that the contents of the app also include Catacchio’s testimony, which recalls his process of graphically elaborating the story in the wake of the visual inspiration offered by Bologna’s porticoes.

But the plots of the detective story go beyond the city’s borders, because DETECt Bologna also has a Danish sister version, DETECt Aarhus, created by a research team from Aarhus University (Denmark), one of the project partners. DETECt researchers have investigated the formation and development of the various local traditions of detective stories that have emerged over the last few decades throughout Europe, discovering how this popular genre has contributed significantly to promoting the development of creative and cultural enterprises in territories that are also very decentralised with respect to traditional production centres.

“The phenomenon of glocal detectives, strongly rooted in their territories, but at the same time able to fascinate international audiences, and therefore act as vehicles of cross-cultural knowledge, is now a reality that affects the entire European continent,” confirms Professor Dall’Asta. “DETECt Bologna aspires to make a contribution in this direction, in the conviction that the by now long and prestigious narrative tradition matured in our city in the sphere of detective stories is worthy of being valorised also as a tool for promoting tourism and culture”. 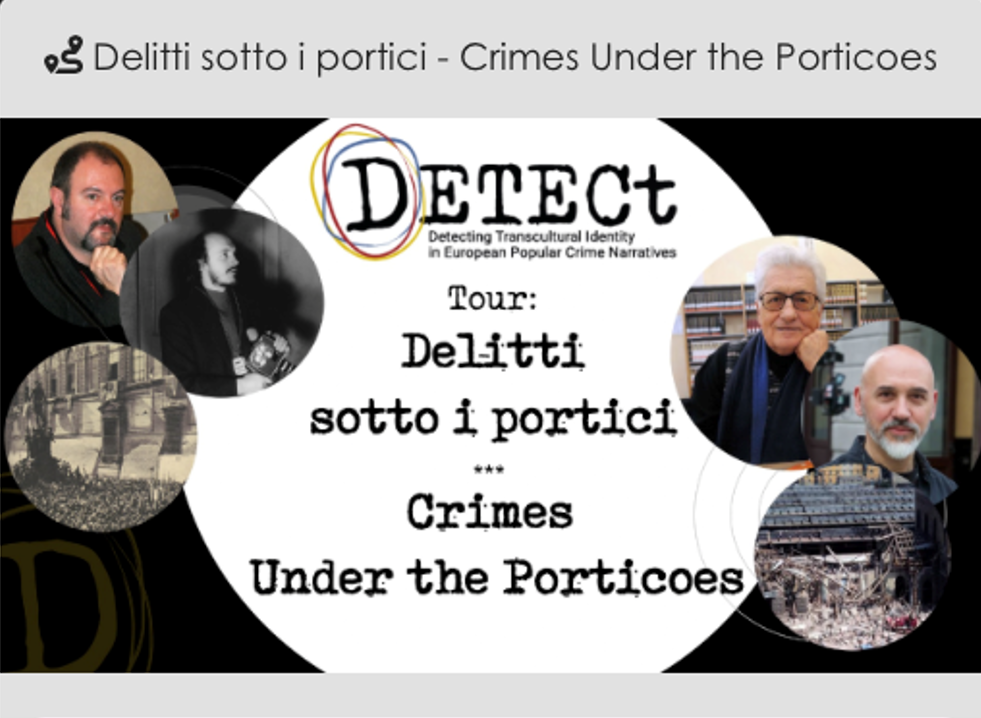 This is the theme of a new monographic issue of the scientific journal Cinéma & Cie – Film and Media Studies Journal, which among other things contains a number of studies analysing the formidable potential that the imagery of detective stories has shown to have for the promotion of tourism in cultural areas.

On the afternoon of Tuesday 26th October (meeting point at 3.00 p.m. in Piazzetta Pasolini) it will be possible to see and test DETECt Bologna by taking part in a tour led by the writer and screenwriter Simone Metalli.

How to use DETECt Bologna

The DETECt Bologna web app is a locative screen tourism experience that can be reached directly through the browser on your smartphone.
To use the web app you have to be in Bologna but you can assemble your tour as you want. You only have to be very near to the stories to unlock the stories of the themed tours.
This website uses cookies to improve your experience. We'll assume you're ok with this, but you can opt-out if you wish.Accept Read More
Privacy & Cookies Policy