Is there such a thing as Eastern-European Noir? The team of Debrecen at CEECOM 2018

Is there such a thing as Eastern-European Noir? The team of Debrecen at CEECOM 2018

The aim of the panel was to evaluate the impact of HBO’s presence in the Central and Eastern European content production focusing on the representation of space. The contemporary logic of television and other media content production assumes that this part of Europe has more common features than differences. This statement is particularly true of HBO’s broadcasting policy: in a region where the original televisual content production has a poor tradition, the presence of HBO permits a progressive and more and more ambitious serial production under the umbrella of Eastern Europeanism. The In Treatment franchise came out with its Hungarian, Romanian, Polish and Czech adaptations almost at the same time, and that particular moment is seen as the starting point of original creative content development in the region. The aim of the panel was to analyse the multifaceted implications of the Central and Eastern European imaginary concept in television series on the large scale of different national and regional perceptions. The new and globalised production style and technology refers to Eastern Europe as to a homogeneous physical spatiality while paradoxically allowing for the affirmation of its inner local differences.

Péter Mészáros presented a paper on Space as a Sign in HBO Series’ Trailers. The author explained that HBO’s Original Programming Department of Budapest presents adopted television series throughout the Central and Eastern European region. The significance of this broadcasting policy is the introduction of the contemporary television’s narratives and their typical genres by fully developed scripts. Mészáros adopted the methodology of semiotics for analysing the official season trailers, interpreted as paratexts of the audio-visual content where localisation is a key element. By the semiotic analysis of official season trailers of series as In Treatment, Golden Life and Társas játék, the paper focused on the use, the function, and the possible connotations of the identified urban space; and the connection between space and other semantical elements.

The title of Keszeg Anna’s paper was Silent Valleys and Noisy Cities: Cultural Geography of Romania through Romanian HBO Series (in absence of Anna, it was read by Molnár-Kovács Dorottya who also participates in DETECt research). Keszeg analysed how space is invested by production value in the opposing spatial structures of two Romanian series, Umbre (2014) and Valea Mută (2016). In Umbre (Shadows) a double-faced Bucharest allows the central character to have a double identity connected to the diurnal and the nocturnal city. Moreover, the two professions of Relu, the protagonists, are mightily anchored in space: in his ordinary life he is a taxi-driver, while during the night he works as collector for a local mobster. Consequently the complex nature of the hero assures the reinvestigation of the classic opposition between underworld and mainstream society, which was the object of crime fiction from its early origins. Similarly, Valea Mută (Silent Valley) explores another traditional spatial opposition between urban and rural realities investigating exactly how crime produces the counter-myth of the transparent sylvan society. Following the methodology of social representation theory this research tried to prove that crime is connected to place in a synchronic way in the latter and in a diachronic way in the former case.

In his paper Kálai Sándor focused on The Representation of Crime in Eastern European HBO Series. His main hypothesis was that, in contemporary crime fiction, crime often plays a secondary role. As a result, the location of the events, based on the accumulation of reality effects, becomes the engine of narratives. Kálai argued, therefore, that a sort of spatial turn characterises contemporary crime fiction. After the huge success of In Treatment, the second wave of products focused on the creation of more ambitious series, still adopting the franchise logic. All of these series are crime narratives, which suggests that the regional HBO production chose this specific genre as a tool to conquer larger audiences in Eastern Europe. The aim of series such as Aranyélet (Hungary), Umbre, Valea Mută (Romania), Mamon (Czech Republic) or Pakt (Poland) is indeed to reveal social problems through the representation of crimes. The paper analysed some of the above mentioned series from a comparative point of view in relation to the following questions: what types of crime are represented in those series? what are the relations between crime and spaces? how do spatial structures (private-public, nature-culture, here-there, our space-other’s space) organize the plot of the series?

The presented papers are to be published in the proceedings of the 11th Central and Eastern European Communication and Media Conference. 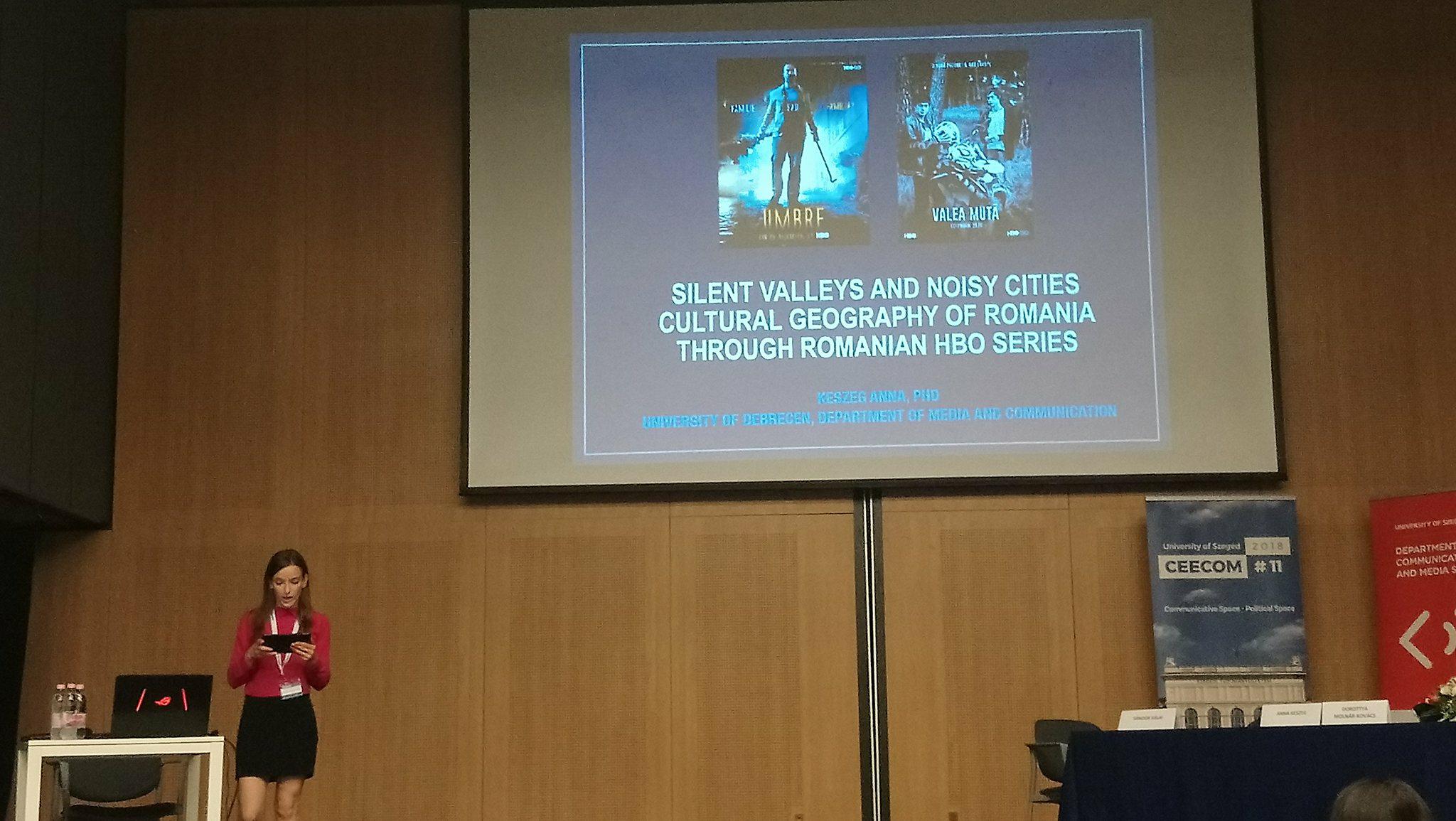 The members of the DETECt research group proposed a panel, entitled Spatial Experience and Mediated Places in Central and Eastern European Television Fiction. The aim of the panel was to evaluate the impact of HBO’s presence in the Central and Eastern European content production focusing on the representations of space.
This website uses cookies to improve your experience. We'll assume you're ok with this, but you can opt-out if you wish.Accept Read More
Privacy & Cookies Policy