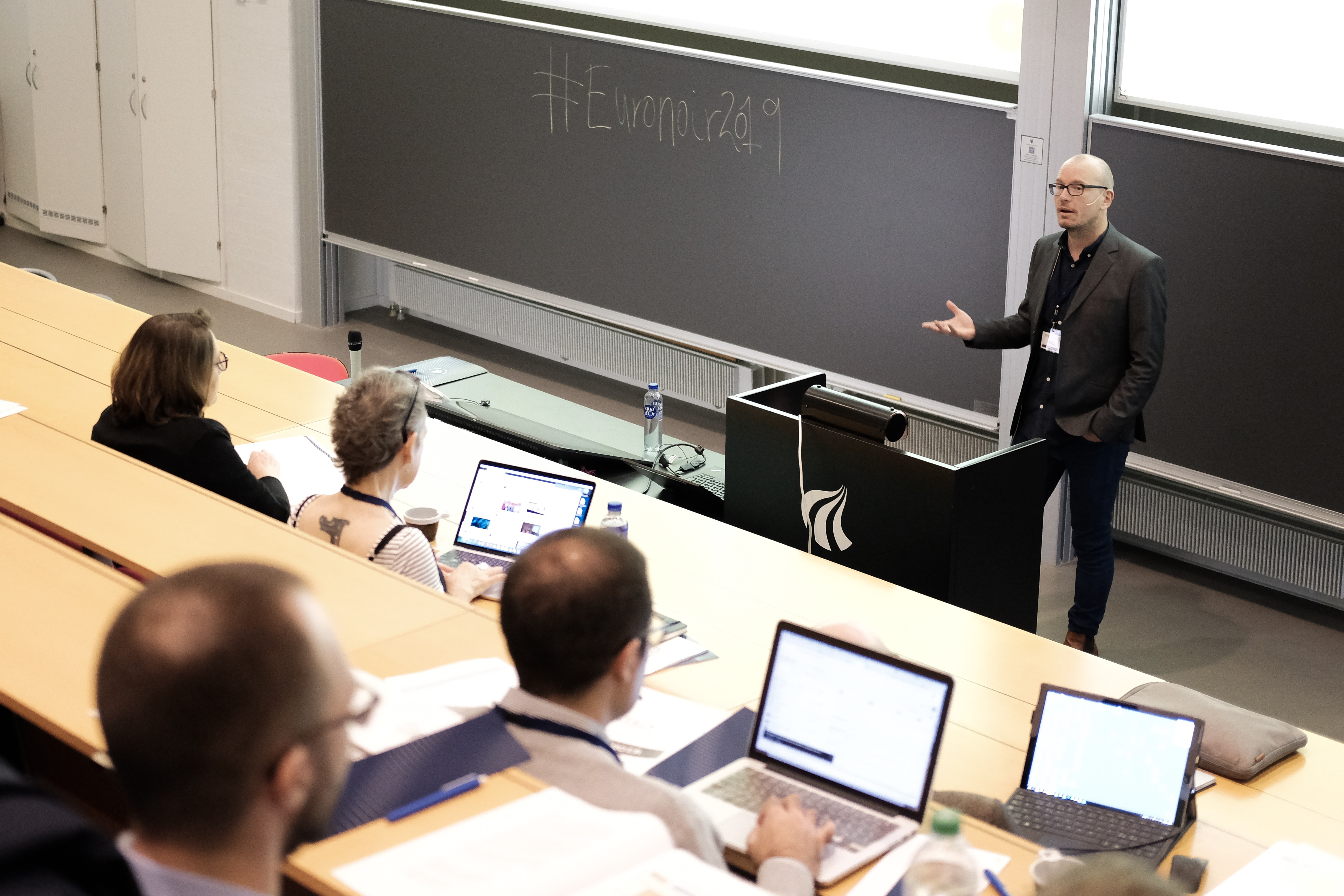 The first day of the DETECt Euronoir conference at Aalborg University started out with a short welcome address by Associate Professor Kim Toft Hansen, who greeted the 50 guests who came to Aalborg for the three-day conference.

“Who put the ‘euro’ in Noir”
In his welcome address he asked, “who put the ‘euro’ in Noir”? The usual suspect must be Barry Forshaw, who wrote “Euro Noir: The Pocket Essential Guide to European Crime Fiction”. But it is also viewers and fans of European crime series that have popularized the term. IMDB now also has a list on Euro noir shows, featuring for example The Bridge (Denmark/Sweden) and Fortitude (set in Iceland), but also The Fall (British) and Dark (German). Journalists now also use the term. The British online newspaper iNews, for example lists Midnight Sun (F/S), Occupied (NOR) and The Team (D/BEL/DK) as “Euro-noir” shows its readers might have missed. On social media like Facebook and Twitter, we see how the DETECt project who is filling the term “Euronoir” with meaning through its posts about the activities of the research project. This led Hansen to conclude that the concept is still developing, changing and shifting through its usage in journalism, by viewers and researchers: “This is what we will be doing during the conference: putting meaning into Euronoir.” 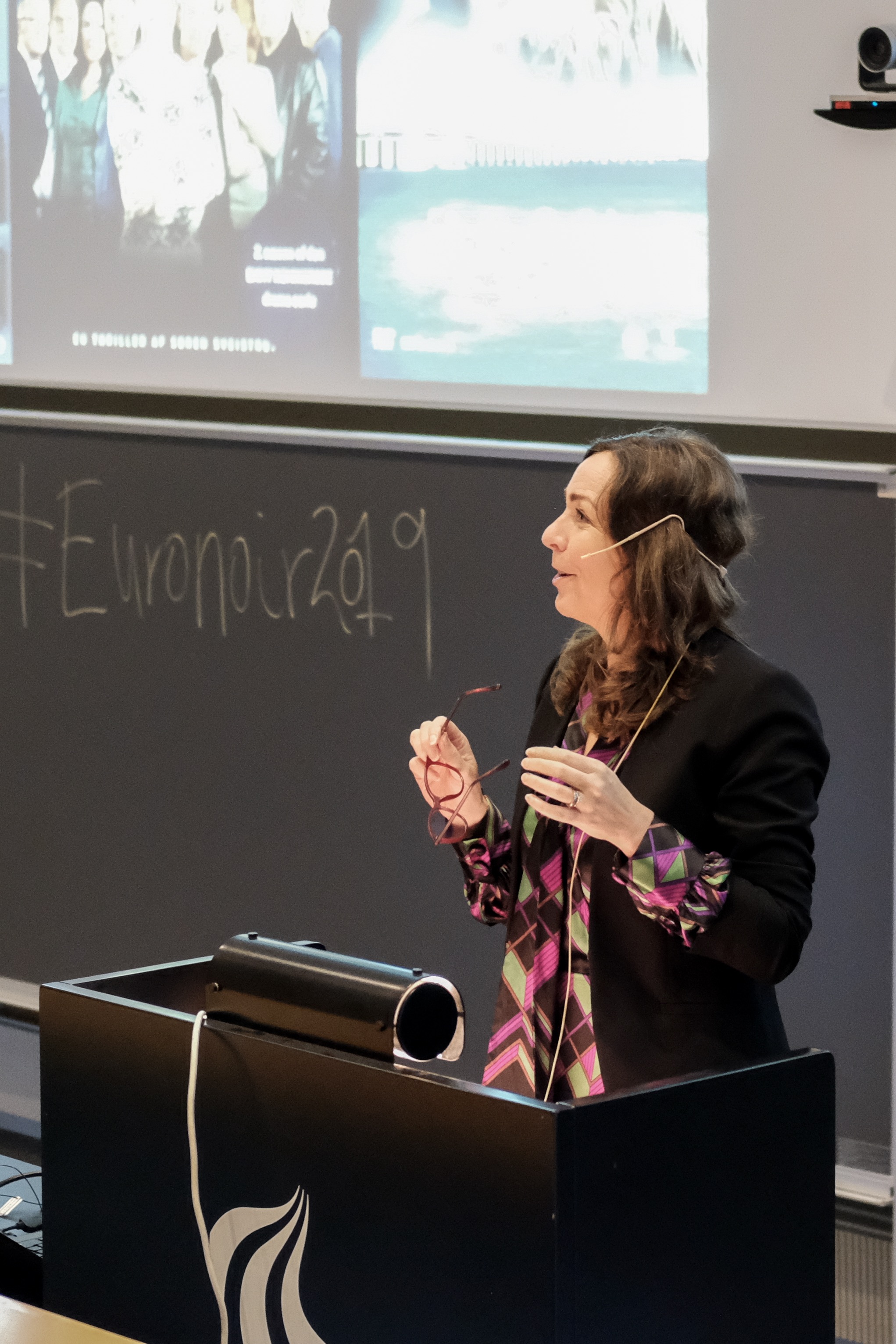 During the three days of the conference, we have the pleasure of a number of keynotes to hear their input on the terms, for example Andrea Esser, who is Professor of Media and Globalization at Roehampton University in London.

In her keynote she addressed the transnational appeal of contemporary crime series. Her talk focused on the audience perspective. In her research Esser studied British audiences who enjoy watching subtitled TV drama – an increasingly big group as the growth in online fan groups and ratings for subtitled drama in Britain testifies. Over the years, an audience of around 1 million viewers for European subtitled developed in the UK, mostly watching on BBC 4, which showed programmes like Montalbano, Wallander and The Killing. The Bridge even developed an audience of about 1.5 million viewers. Esser pointed out that “for the hugely competitive and fragmented British TV market this is very remarkable.”

“The thing you are watching for is – the people.”

In her keynote speech, Esser stressed the importance of relatability and empathy in the process of watching television drama, which leads viewers to feel similar emotions to those people we see on screen. This point is illustrated by a quote from one of her research participants, who said she felt as though she had to watch the Icelandic series Trapped with a coat on, because it was so dark and bleak. Surprisingly, Esser found that “language does not make as much of a difference as previously perceived” in this process of empathy for what is happening on screen, “at least under the right conditions”. Esser explained that because they have to focus so hard on the subtitles, viewers also focus on just the drama, which helps the immersion into the series. In the focus groups she found that viewers of Euronoir series watch not so much for the crimes and homicides, but for the people and the relationships in the series, for example reading the first series of The Killing as a study in human grief.

Esser, however, warned against seeing these processes as something new, given that immersion and empathy for characters is also an important element of other forms of television such as soap operas. This view is supported by industry professionals. One of her industry interviewees described the Saturday night slot for the European dramas on BBC4 as “posh soap for people, who want to drink wine.” Playing a brief clip from The Killing, Esser illustrated how the series also uses aesthetics often associated with the soap, such as close-ups and the use of music to convey emotions. She concluded that the close-ups cause “emotional contagion” and argued that “the fact that viewers don’t speak the language does not impede the process” at least when they are really focused on the series, a state supported by the concentration required by the subtitles. The fact that in Nordic Noir series emotions are often conveyed through faces, rather than dialogue helps the process, too.

In the afternoon several smaller panels looked into issues of European Transculturalism on Screen, representation of the Mediterranean region and British crime drama, before the whole group reconvened for the industry Panel with the invited speakers:

Starting the conversation Kim Toft Hansen asked how DNA, the first Danish-French co-production came about. Trin Hjortkjær Thomsen and Katrine Vogelsang then explained that the project had been in production for many years, with writing starting at least six years ago, when TV 2 was already on board, while the production company Nordisk Film and co-producer Arte came into the process shortly after. The original idea was an episodic, procedural TV drama, but then the story focused on the story of the investigator. Hjortkjær Thomsen emphasized that “the story is rooted in a contemporary European context.” The series is set in Copenhagen, North Jutland, Czech Republic (depicting Poland and some places is France), Paris and rural France and was shot on 90 locations across Europe.

Katrine Vogelsang explained that because DNA had three different production companies, three different sales agents and already a complex story, so it was important that the broadcasters spoke with “one voice”. Arte, she told the audience, was very interested in making the series authentic and real when set in France, but there was never a demand that more of the series would be set in France. In fact, although a lot of the series is set in Poland, there was no Polish funding partner involved.

Hanne Palmquist emphasized the difference of HBO Nordic with broadcasters like TV 2 Danmark. HBO Nordic is not a national broadcaster but targets the entire Nordic region, so shows must be made to travel. HBO Nordic does drama, but also documentary series. For HBO Nordic the exclusivity of rights for the Nordic region is important, but this cannot always be achieved, for example when there is national production funding involved that requires a national distribution, too. HBO is funding the projects fully, but still also exploring options of “soft funding” e.g. when there are tax incentives. This was part of the reason The Beforeigners was partly shot in Lithuania (for interiors). The local rooting of the stories is very important for HBO Nordic. But Palmquist showed that it is interesting to see how these locally rooted stories are viewed. The Beforeigners, she explained, is clearly a Norwegian show, but it ended up being the most watched show in Spain on HBO Europe for a couple of weeks.

Why crime? Because “you can’t have a story in which nothing happens.”

Hanne Palmquist echoed Andrea Esser’s point about the relatability of drama: “If you are happy or sad in Denmark you can probably relate it to someone else?” She argued that the stories are about “what does it mean to be a human being”. The stories can be very universal and thereby relatable. However, she also agrees that the exotic quality of HBO’s series can also be an appealing quality.

Katrine Vogelsang explained that crime drama has a strong motor for the stories, which also keeps the viewers watching. On TV, “you can’t have a story in which nothing happens.” She summarized that a crime story is always about “there has been a crime and it needs to be fixed.” Answering Kim Toft Hansen’s question why HBO Nordic hasn’t done a classical Nordic Noir series, she claimed that: “The traditional Nordic Noir show has been done many times by both the public service and the commercial broadcasters. We should offer to the audience something else.” The Beforeigners is a crime show at heart, but it is written by comedy writers and it also parodies the Nordic Noir genre.

Looking for collaboration, but you have to have the right story

To conclude the panel, Kim Toft Hansen asked about the importance of European collaboration in TV. Original programming for the Nordic region on HBO started three years ago and Spain started shortly after. “It’s obvious that when the right story comes, it will be obvious to collaborate within the HBO family, but that moment hasn’t happened yet,” said Hanne Palmquist. In contrast to this Hjorthkjær Thomsen emphasized that it is very difficult to finance from the Danish market only. So “a patchwork of finance” is important for Danish producers. Katrine Vogelsang added that they mainly look at the European market for selling the Danish programmes, but highlighted that “you have the right story”.  Trin Hjortkjær Thomsen agreed that “developing the stories and then trying to find the money” is the path to new success.

The conference continued with another parallel panel session, before moving on to the screening of DNA in the evening at Aalborg University’s city campus. 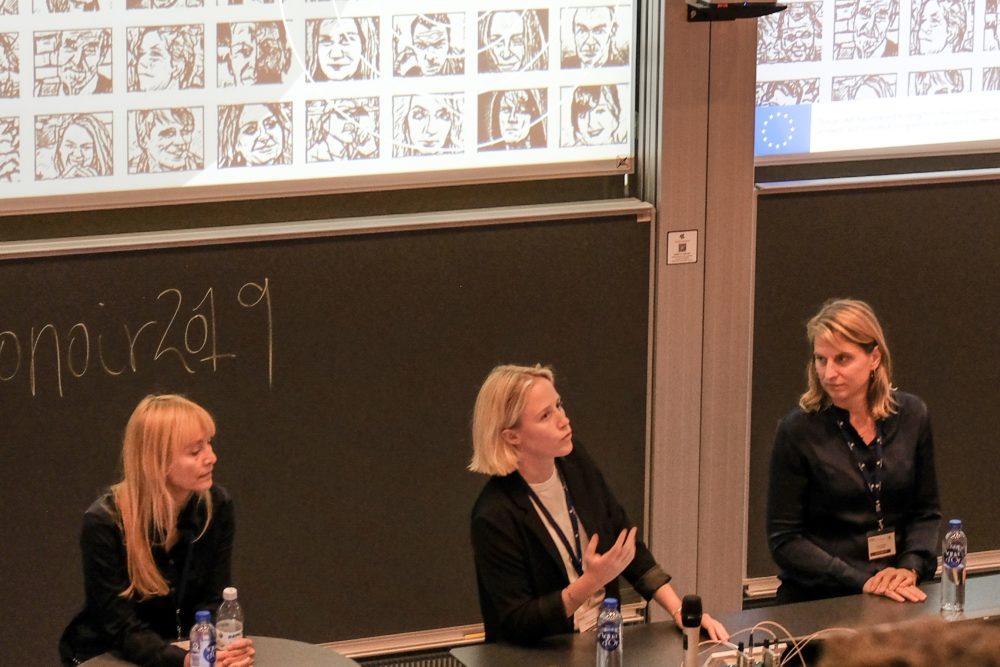 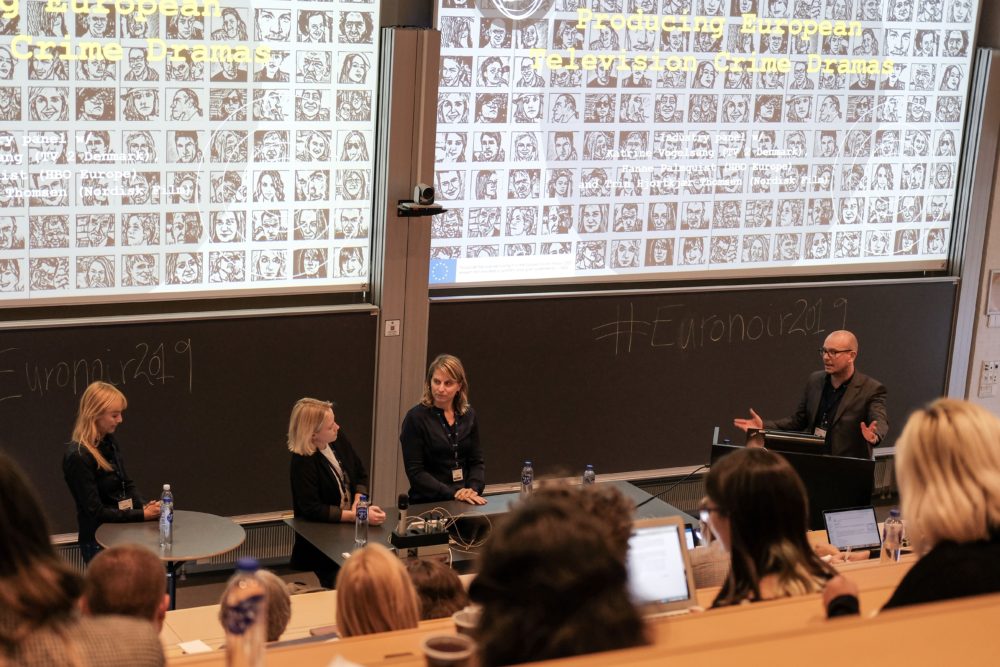 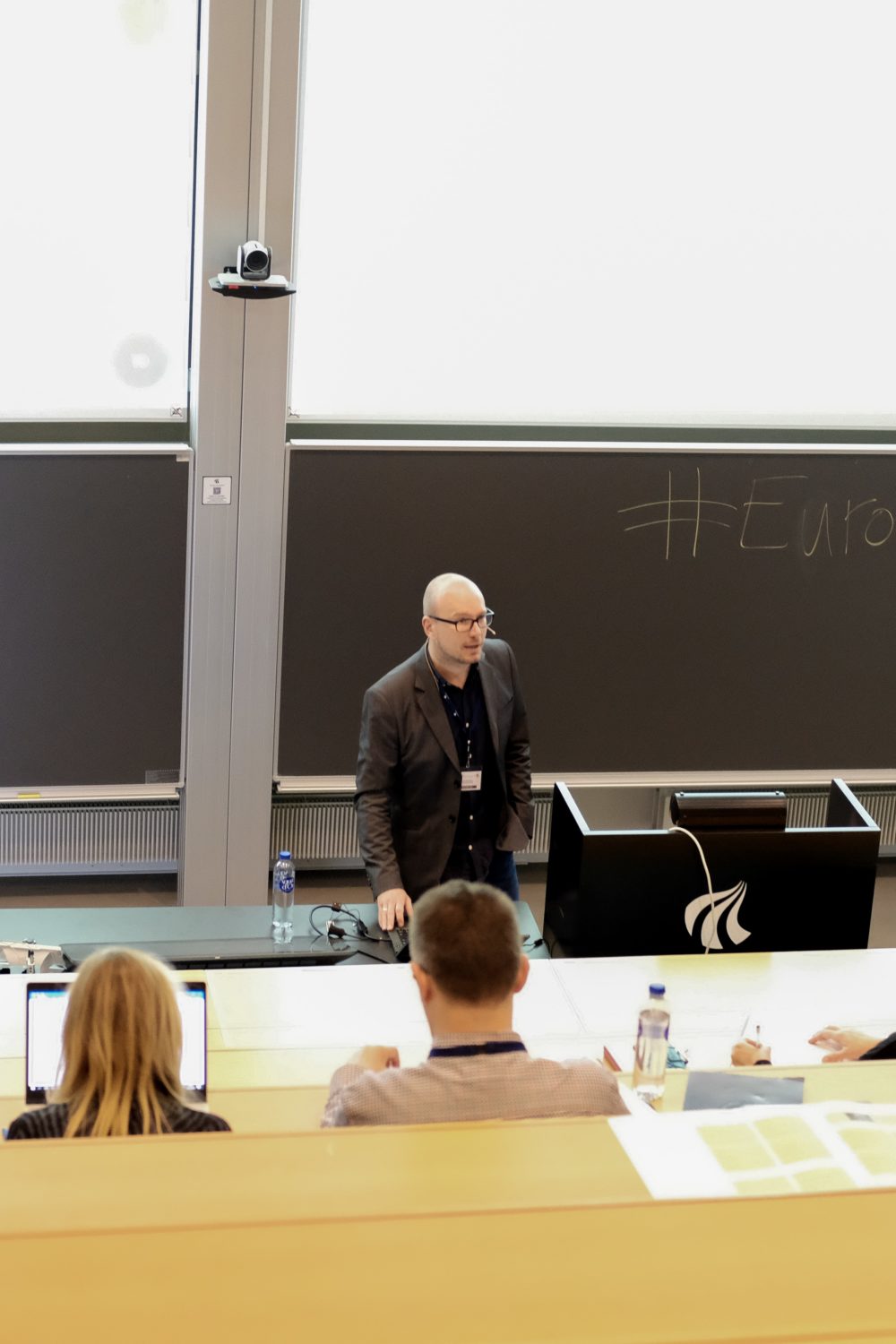