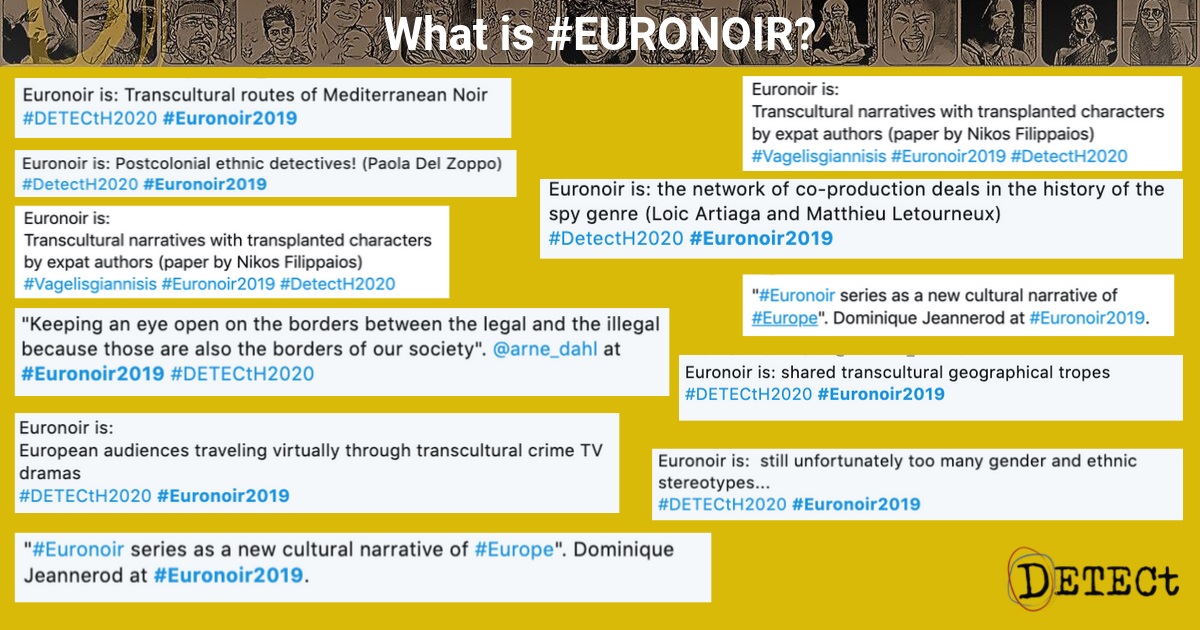 The third day of the Euronoir conference began with a keynote panel about Nordic Noir in its European Context. Professor Sue Turnbull form the University of Wollongong, Dr. Anna Estera Mrozewicz from the Adam Mickiewickz University in Poland and Professor emerita Gunhild Agger from Aalborg University presented their thoughts on three different case studies of Nordic/Euronoir series, which introduce their audiences to foreign countries, pressing issues as well as to the shared history of the European continent.

Sue Turnbull started off the morning with “a walk around Iceland”, via the Icelandic TV drama Trapped. This seems like a curious topic for a researcher working in Australia on TV shows like Miss Fisher’s Murder Mysteries or Mystery Road., which make a big contribution to the value of the TV drama. However, Sue Turnbull showed that there is a lot of connection between Iceland and Australia – at least in terms of television. For both landscape is an important element and key to success with audiences abroad. Moreover, both Australia and Iceland are two relatively small TV markets, which means that they have to deal with constraints of funding and creative resources.

What brought Sue Turnbull to Iceland was a trip to the country advertised by Nordic Noir and Beyond, inviting crime fans to explore Iceland in the footsteps of Trapped. The narrative of Trapped and its main character, Andri, were used as a starting point for guiding tourists across the island – including Andri’s food tips. However, as much as she enjoyed her trip around the island, Sue also pointed to the problem of over-tourism. After Croatia, Iceland has the second highest ratio of tourists to inhabitants. In 2017, more than 2.2 million people visited Iceland, which has a population of about 360,000.

In Iceland, Sue Turnbull talked to the people involved in film and television production, which helped her construct a timeline of Icelandic television series. Her timeline highlights that TV production in Iceland has sped up in the past 15 years, but still it is a small television market with only about one new domestic series per year. Sue reminded her audience: “because the Icelandic audience is so small funding has always had to come from somewhere else” for Icelandic television. Now, this funding also comes from streaming services like Netflix, which is co-producing the upcoming Valhalla Murders.

“The problem for Iceland is – they haven’t got much crime, so they have to invent it.”

Another element of Iceland as a small TV nation is the fact that the group of creatives involved in Icelandic TV production is quite small. Sue Turnbull introduced her audience to three central figures in Icelandic TV: Margrét Ornólfsdottir, Baltasar Kormakur, the former the storyliner and the latter the director of Trapped, and David Oskar Olafsson, who founded the production company behind The Valhalla Murders. The next ‘problem’ of the small TV nation Sue pointed her audience to is: “they haven’t got much crime, so they have to invent it.” Sue reminded the audience thought that serial killers, again, something Iceland doesn’t actually have: “The only one they had was executed in 1596.” Finally, the creatives she spoke with were frustrated that what the international television market is interested in is only the Icelandic landscape, but the upcoming Valhalla Murders will take place in the city and it will also be the first crime drama with a serial killer.

Wataha: “A crime story has the power to transmit all kinds of values”

Anna Mrozewicz introduced the audience to the Polish TV series Wataha (The Border). The series is set at the border between Poland and Ukraine. The first two series were the most expensive TV series produced in Poland and the most watched on HBO Poland. Its third series on HBO Europe will launch soon. The series also travelled beyond Eastern Europe to the UK where it got favorable reviews, praising the ways in which it addresses current issues in European politics and society. Wataha deals with issues such as migration and arms trafficking.

Anna Mrozewicz introduced her international audience to the difference between the mainstream (public and private channels) and the premium TV outlets (pay-TV and streaming) in Poland. The two differ not only in budget, but also in the way they explore characters and address social and political issues. She emphasized that Wataha would have been a very different series if it had been produced by one of the mainstream commercial channels, for example because the channel would not have invested in shooting the series on the actual location it is set in – the Bieszczady mountains between Poland and Ukraine.

Pointing the opening of the series, Anna Mrozewicz showed the use of Nordic Noir aesthetics in the series. Looking at the changes between series one and two, she highlighted how the series developed from a national into a transnational and European show. Season two has the Ukrainian war as a background, but also evokes memories of World War II. A plotline about a brutal murder of refugees in Poland was told in a way that is reminiscent of the 1941 pogrom against Jews in Jedwabne. She concluded that the series combines a tourist gaze on the Bieszczady mountains with a vision that is “dark and gloomy” – reminiscent of Nordic Noir. Anna Mrozewicz summarized the importance of Wataha: “It reflects the dark underside of European society and our European community at large.”

Gunhild Agger: “The dark history of Europe” in the aftermath of 1968

TV historian Gunhild Agger’s talk took a look back into European (TV) history, focusing on how political crime in the aftermath of 1968 was represented on screen in Denmark, Germany and the UK. She explained that she was inspired to look at this period with the anniversaries of 1968 in 2008 and 2018. She highlighted that most of European film and television draws on the historical and contemporary conflicts in the region. Reviewing academic literature about historical film and TV drama, Gunhild Agger drew attention to the importance of remembrance through and around the media.

Her Danish example is Blekingegade – The Left Wing Gang (2009 on TV 2 Danmark), which is based on real events, politically-motivated crimes and robberies that unfolded in the 1980s in support of the PFLP. The central figure was Jan Weimann. The Left Wing Gang is a series about the consequences of 1968 as a “dark heritage of Europe”, she explained. Gunhild Agger pointed out that the series was a game changer for TV 2. It featured high-profile actors such as Nicolaj Coster-Waldau and aimed at an international market, too, travelling to 48 countries. Subsequently, Gunhild Agger compared the Danish case to Der Baader Meinhof Komplex, a German film from 2008, based on the crimes of the Rote Armee Fraktion (RAF), who not only committed bank robberies but also hostage-taking and murders. Gunhild Aggers third example is The Little Drummer Girl, a series screened on the BBC in 2018, which is based on a novel by John Le Carré and tells the story of an actress recruited by Mossad to infiltrate a Palestinian terrorist group during the 1970s.

TV drama, “the canary down the mine” of European society

During the discussion, the panelists explored the idea that the cases they talked about are “modern fairy tales”, dramas that do really important cultural work by exploring dark sides of European society and history. Sue Turnbull highlighted how crime drama is “like the canary down the mine”, dramas honing in on what is “bugging” their audience and the societies they live in. After the first morning panel, four parallel session focused on crime fiction from Hungary and Germany, on audience research about the popularity of Euronoir as well as on the production strategies of HBO and Netflix in Europe.

Robert Saunders’ keynote addressed the topic “the Political Culture(s) of European Crime Series: Place, Power, Identity”. In Europe today, Saunders is a Professor of history, politics and geography at Farmingdale State University of New York. He pointed his audience to the competing flows of geo-political cultures in today’s society, such as elite vs. mass culture, conservative vs. progressive attitudes and identitarian vs. pluralist conceptions of identity. To introduce the audience to the topic he showed the opening sequence of the German-Austrian television series Pagan Peak. In the scene, a group of Austrian Policemen open a truck in which migrants have been trafficked across the border – the migrants are found to be dead.

Starting with a definition of political culture, Robert Saunders pointed his audience to the complexity of the issue and its intersection with popular culture. In his talk, Saunders was interested in the intersection of Identity, Place and Power in Crime Drama series that explore geo-political themes. His research interest into this topic started out with US-crime series The Wire. In the series, the city of Baltimore is a central character, which underlines how intertwined the issues the series addresses are with the place.

Television today, as the papers in the conference have provided ample evidence for, acts as a catalyzer of border-crossing. Saunders emphasized: “Television now is very global and we take it with us wherever we go. “The internationalization of content – Saunders highlights – is driven by online platforms”. Saunders himself was astonished how subtitled drama arrived in the USA on the back of streaming services. Saunders explained that he is interested in narratives that engage in world-building that impact cultural citizenship and promote civic agency. He looks at recent long-form drama from Europe which address elements of European identity and culture and engage with thematic elements that go beyond personal motivation for crimes committed. He illustrated this point with a clip from the third season of the French-British series The Tunnel, which shows a migrant boat being set on fire by a masked man.

Saunders developed a typology of crime series that explore themes of the “villainous corporation, “murderous neoliberalism”, “the deadly border”, “the dead other”, “globalized gang violence” and “terrorism as crime drama”, introducing his audience to a range of examples for these categories. Examples of the first category include the French-Swedish series Midnight Sun and the Finnish series Deadwind. Murderous neoliberalism is addressed in shows like Spanish Money Heist, British Marcella and the Icelandic Trapped, which Sue Turnbull has focused on in the morning.

Crime as reflection on the state of the nation is the topic Saunders is most interested in and told his audience that “this is really were Nordic Noir excels”. His examples for this theme includes the Swedish-Danish The Bridge, Blue Eyes from Sweden and Stella Blómkvist from Iceland.

Saunders’ last clip comes from the Irish series Taken Down focusing on a Nigerian immigrant who arrives in Europe via Italy and then comes to Dublin that presents itself as a “carnivorous city” that eats up the migrants. All of the series he showed addressed issues of migration from outside Europe’s borders, but with different degrees of (de-)humanization. He highlights, that it is not surprising that we see more and more of representations of the migrant crisis on television today, because the TV production cycle is about three years behind events in Europe.

To conclude the conference, project leader Monica Dall’Asta and Federico Pagello from the University of Bologna presented the DETECt Portal introducing the audience to the maps and learning material developed by the project. The conference began with the question “who put the ‘euro’ into ‘noir’?”. Over the three days, the five keynote panels and twelve parallel sessions, the picture of what “Euronoir” means as an academic concept, but also as a form of popular culture in Europe, became more complex thanks to the interventions and ideas of all speakers and participants from across Europe. 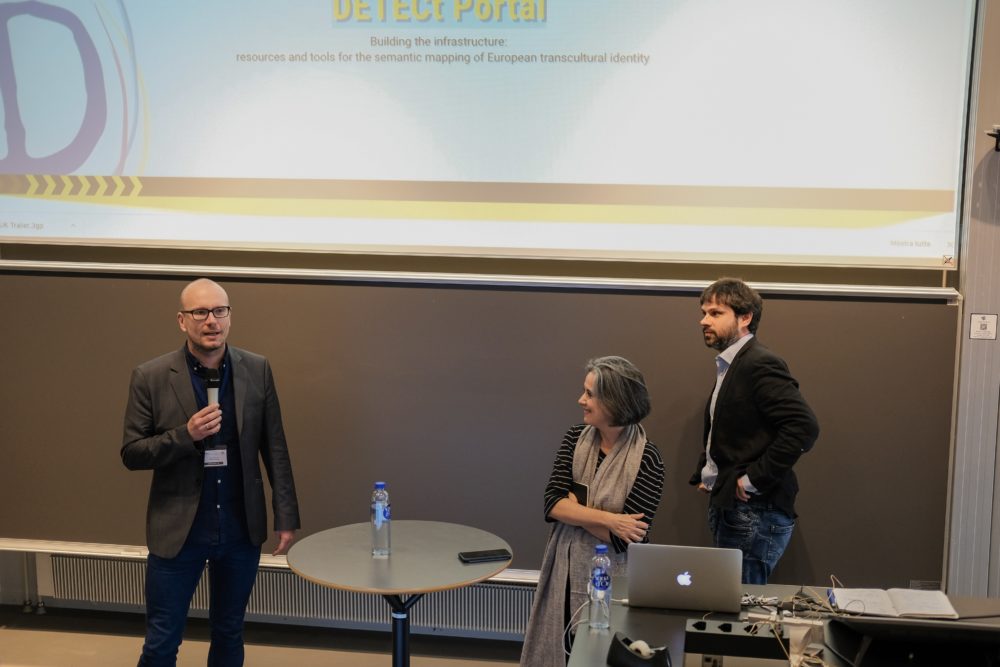