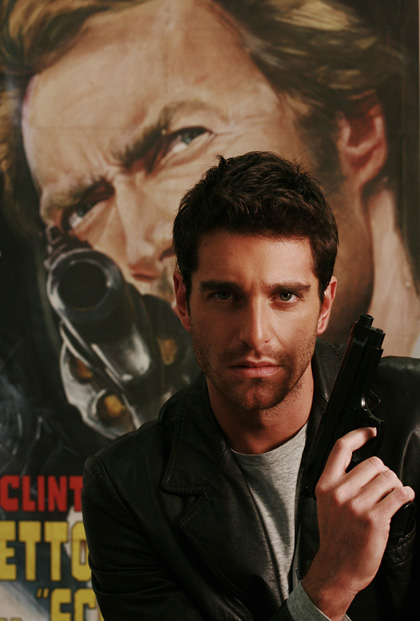 Inspector Coliandro is the main character of a crime fiction series written by Carlo Lucarelli and adapted for television by the Manetti Bros for RAI Fiction. Coliandro is an atypical detective, who tries to act as a tough and resolute action hero when he is actually an affectionate, clumsy, and muddling detective who often finds himself involuntary involved in troubling situations on the backdrop of a multicultural, underground and noir-like Bologna. In the series, Coliandro is presented as a good-natured guy whose limited cultural means prevent him from understanding why he is often regarded by the other characters, especially women, as a sexist and even a racist. The character debuted in 1991 in the short story Nikita, published in an anthological collection of detective stories written by a group of Bolognese crime fiction authors, I delitti del Gruppo 13.  A comic adaptation in five episodes was published in 1993 by Onofrio Catacchio. Lucarelli then revived the character in the novels Falange Armata (1993) and Il giorno del lupo (1994). Especially Falange Armata, with its references to the real crime events associated with the White Uno Gang, which was operating in those years in Emilia-Romagna with great media resonance, helped Coliandro consolidate his popularity and Lucarelli increase his fame as one of the most influential crime writers in Italy. In 2003, when Lucarelli was already a renowned writer of both crime novels and crime TV shows, RAI producer Tommaso Dazzi proposed to adapt Coliandro for television, engaging Lucarelli as screenwriter and direct supervisor.

Carlo Lucarelli talks about the intermediality of Coliandro [in Italian]:

Carlo Lucarelli talks about the intermediality of Coliandro [in Italian]: